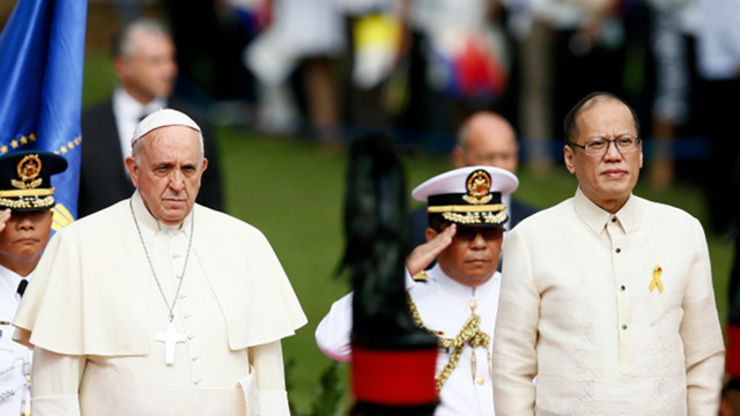 Of all the topics Pope Francis touched on in his Malacañang speech – from Super Typhoon Yolanda (Haiyan) to migration and indigenous peoples – one comment drew the most praise from Twitter-savvy Filipinos.

“I hope that this prophetic summons will challenge everyone, at all levels of society, to reject every form of corruption which diverts resources from the poor,” the Pope said before an audience that included the country’s top politicians.

The pontiff’s remark in his first ever speech in the Philippines on Friday, January 16, hit a nerve for Filipino Twitter users, with the message resonating in a country outraged by corruption scandals at the highest levels.

The Pope made the comment as he stressed the importance of social justice, criticizing what he called the “glaring and indeed scandalous, social inequalities.”

Watch his whole speech below.

Instantly reacting to the speech, Filipino netizens said the comment was a “memo to politicians” especially Vice President Jejomar Binay, accused of rigging bids, using dummies and amassing wealth from infrastructure projects in Makati when he was mayor of the country’s financial capital. Binay is running for president in 2016.

Binay was among the guests at the Palace event addressed by the Pope.

It's quite embarassing that the Pope has to highlight corruption in his speech. But yes, we needed that. #truth #reality #PopeFrancisPH

Social media users pointed out that right after the Pope made his corruption comment, the TV pool coverage cut to the reaction of Binay.

Your pope calls for honesty, to reject corruption! And the Binays, Revillas, Estradas, Enrile were like

I'm guessing the blood pressure of VP Binay shot up when he heard Pope Francis say "reject all forms of corruption". malaking dagok!

Others though said that President Benigno Aquino III should get the Pope’s message.

Pope Francis: "Stop corruption that divert resources away from the poor." In your face, Noynoy!

Some netizens noted the irony of the Pope making his speech at the presidential palace, the country’s seat of power, with politicians in attendance.

Pope Francis talked about corruption infront of the most corrupt people in The Philippines. IRONYYYYYY

Filipinos said they hoped that politicians will heed the words of the so-called “rock star pope” instead of just jostling to shake his hand, getting photo opportunities, and putting their names and faces on banners welcoming the Pope.

Pope Francis remarks on Corruption in the Philippines. Corrupt political leaders is drenched by the rain of shame. #LoloKiko

Major corruption scandals hit the Philippines in the past years, starting with the multi-million peso scam involving senators and congressmen’s development funds known as the “pork barrel scam.” Lawmakers are accused of conniving with bogus NGOs to funnel development funds for the poor into their own pockets.

The Vice President also faces several corruption scandals, and is accused of owning a lavish estate complete with gardens similar to Britain’s royal Kew Gardens and an airconditioned piggery.

The President’s allies and friends including police chief Alan Purisima are also accused of corruption. The Ombudsman suspended Purisima pending an investigation into allegations he influenced the outcome of a questionable contract the police entered into with a courier service.

While netizens welcomed the Pope’s remark, some questioned Aquino’s remarks.

The President spoke before the Pope took the podium, delivering a speech where he criticized the local Catholic Church’s “silence” on “the previous administration’s abuses.” It was an obvious reference to former President Gloria Macapagal-Arroyo, now detained over corruption charges.

Watch his speech below.

Some bishops were perceived to be close to Arroyo, and even got implicated in the so-called “Pajero Bishops” controversy for accepting luxury vehicles from the Philippine Charity Sweepstakes Office (PCSO).

Aquino is fond of criticizing Arroyo in his speeches but some Twitter users including Rappler Thought Leader and Ateneo political science instructor RR Rañeses felt that he should have spared the visit of the leader of the Roman Catholic Church.

in the spirit of mercy and compassion, i'll just think of President Aquino's speech this morning as "sorta inappropriate"

Aquino's speech is off.

The President contrasted the Church’s “silence” during the Arroyo administration with its role of standing up to the Marcos dictatorship where it acted as “the Church of the poor and oppressed.” He saw now during his administration, Church leaders often criticize him.

Some though praised the President’s speech.

President Aquino has an excellent speech

Great speech Mr. President. It was the perfect venue for revealing the hypocrisy of the Philippine Catholic Church #PopeFrancisPH

What's the big fuss over @noynoyaquino's speech? Was it not the truth? Does the truth choose the time it has to be spoken? #PopeFrancisPH

What are your thoughts on the Pope and the President’s speech? Let us know in the comments section below. – Rappler.com