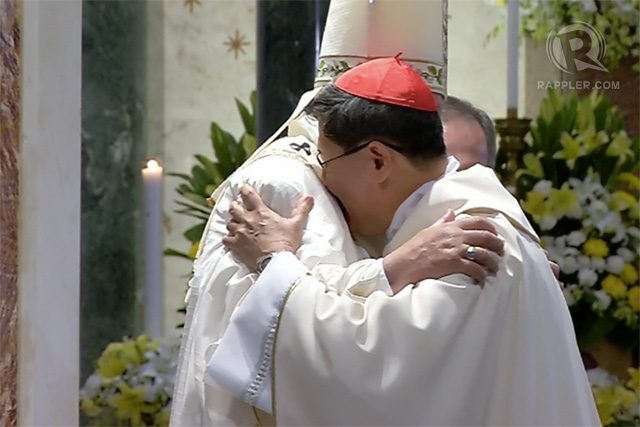 “Now it is open and it warmly welcomes you. This cathedral has been razed to the ground many times but it refuses to disappear. It boldly rises from the ruins just like the Filipino people,” Tagle said on Friday, January 16. The Cardinal delivered his message of gratitude before the concluding rite of the Mass.

“We bishops, priests, religious men and women have seen and lived the suffering, but also the determination of our people. We are afflicted every way possible but we are not crushed,” Tagle said, drawing a parallelism between the cathedral and the Filipino people.

What is the secret of the resilience of the Filipino people? Tagle said Jesuit historian Horacio dela Costa provided some answers. Dela Costa, according to Tagle, said the Filipino has “two treasures” and “two wealths – music and faith.”

“Our melodies make our spirits soar above the tragedies of life, our faith makes us stand up again and again after earthquakes, typhoons, and wars.”

“Many of our poor people are beginning to rise from human-made calamities as you, Holy Father, came to us. You bring fire not to destroy but to purify. You bring an earthquake not to shatter, but to awaken, you bring weapons to assure, to encourage. Indeed you are Peter, the Rock, upon which Jesus built his Church. You are Peter who comes to build and strengthen his brothers in faith,” Tagle said.

The first Mass celebrated by Pope Francis in the Philippines was held in the 8th cathedral building that was closed 3 years ago for repairs.

The Manila Cathedral is the first cathedral in the Philippines that can be considered “a symbol of the Filipino people,” Tagle said. After it was destroyed, along with succeeding cathedrals that were totally destroyed, the 7th cathedral was “mercilessly bombed in Intramuros during the Battle of Liberation in 1945.”

But it has been resurrected.

It was in February 2012, when Tagle, then newly-appointed Manila Archbishop, ordered its closure and renovation after structural integrity issues were raised. Repair and construction cost was initially pegged at P40 million-P50 million, but by the time it was completed in 2014, the total cost had ballooned to about P200 million.

Tagle welcomed the Pope to the newly-constructed cathedral, the 8th cathedral building, saying, “We welcome you to our land of… infinite hope…Only Jesus will rebuild and renew his faith in the Philippines.”

Tagle’s message was applauded by the crowd as Pope Francis stood to give him a brotherly and warm embrace. – Rappler.com