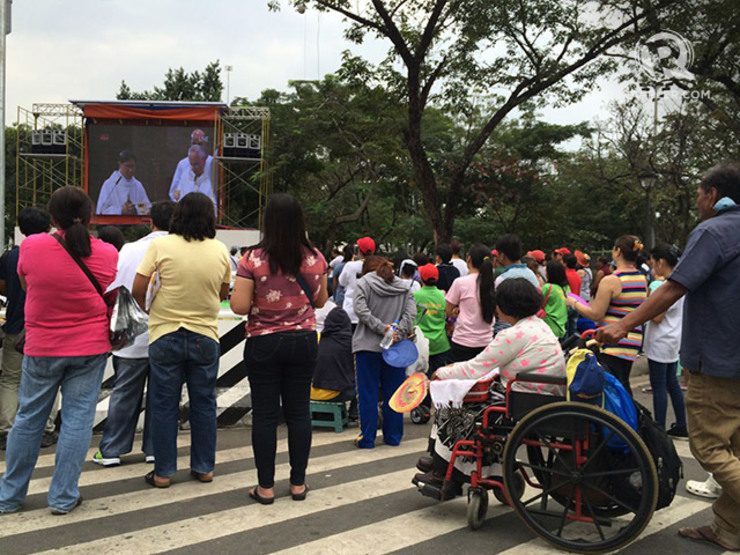 Facebook Twitter Copy URL
Copied
'He should meet the people before anything else,' those who have not gotten a glimpse of the Pope say

MANILA, Philippines – 19-year-old Marvie Rico, a vendor in Manila, has been chasing the popemobile since Pope Francis arrived in the Philippines on Thursday, January 15. So far, she has not been lucky enough to catch the Pope.

On the second day of the papal visit, now carrying her young nephew, Rico tried again to wait for the Holy Father on his way to the Manila Cathedral from the Malacañang Palace. He missed the papal convoy by a split second because it moved swiftly, according to Rico.

She complained that the Pope, also called the “People’s Pope,” has been meeting political and religious leaders instead of spending time with the people.

“Puro gabinete lang naman ang nakakasalamuha niya. Makikita mo naman. Tingnan mo ang mga tao nag-aabang na sa labas. Kahit sa simbahan di ka makapasok,” Rico lamented. (He only meets with the Cabinet. You can see it. Look at the people waiting for him outside. You can’t even go near the church.)

On Thursday morning, Pope Francis met with President Benigno Aquino III and other officials in Malacañang. He proceeded to the Manila Cathedral for his first Mass in the Philippines.

The mood in the streets and the pomp and circumstance in Malacanãng and the Manila Cathedral were a study in contrasts.

This is ironic, according to Rico, because before the Pope arrived, he perceived him to be “a good man who preferred to be with the people.”

Rico said this was also the message the Pope imparted during the papal mass he watched on a big screen in a street leading to the cathedral in the country’s capital.

In his homily in front of bishops, priests, nuns, and other religious people, Pope Francis said: “The poor are the center and the head of the world. If we take away the poor..we cannot understand the whole message of Jesus Christ.”

“Mauna dapat ang mga taong bayan (He should meet the people before anything else),” Rico said in reply to the Pope’s homily.

The Pope, however, is scheduled to meet with Filipino families at the Mall of Asia Arena Friday afternoon at about 5:30, celebrate Mass at the Quirino Grandstand on Sunday, January 18, at 3:30 pm. (READ: Official Schedule: Pope Francis in the Philippines)

“It is quite poignant that he is delivering it from Manila Cathedral, a symbolic place of power and elitism,” Jayeel Cornelio, a sociologist of religion at the Ateneo de Manila University, explained the striking irony of the Pope’s homily.

Cornelio, however, underlined the importance of the Pope’s message to Philippine society.

“To be sure, this message of poverty is not new. St Francis (of Assisi) had already called for it a millennium ago. But for it to be preached by the Pope himself in 21st century Philippines must be groundbreaking not in the sense of novelty but in the context of corruption and exploitation in this country.”

Cornelio explained further that in the Philippines, powerful institutions like the Church may end up lax about their social role because they may enjoy the benefits of being in power.

“How can we proclaim the newness and liberating power of the Cross to others if we ourselves refuse the word of God to shake our complacency?” Francis asked Church leaders and religious people who attended the Mass.

“The Pope’s reformism has to do with compelling the clergy to be more in touch with the plight of the weak and the poor. His reformism is not theological but practical,” Cornelio said. – Rappler.com