‘Do you love me?’ Pope amused with crowd reaction 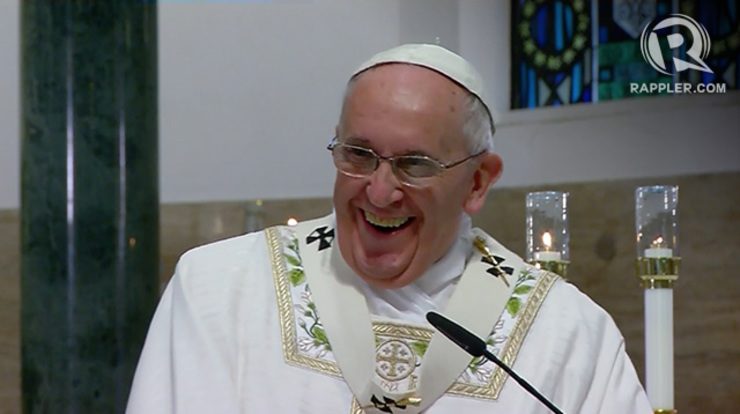 Facebook Twitter Copy URL
Copied
Pope Francis begins his homily with a biblical quote, but the crowd mistakes it for a question – and responds with enthusiasm

MANILA, Philippines – It was meant to be a quote from a gospel reading, but to the eager Filipinos watching the livestream of Pope Francis’ Mass outside the Manila Cathedral, it sounded like a question.

But before the Pope could continue the next sentence, the hundreds crowding Plaza Roma outside the Cathedral shouted: “Yes!”

Francis quickly replied, “Thank you very much,” before laughing along with the crowd.

The Pope celebrated Mass at the cathedral with about 2,000 priests, bishops, and religious individuals.

Hundreds gathered in Plaza Roma to watch the Mass from LED screens set up outside the venue.

In his homily, the Pope repeated his earlier message urging officials to fight against injustice, in particular highlighting the Church’s role to “acknowledge and combat the causes of the deeply-rooted inequality and injustice.”

He also called on priests to “[live] lives that reflect the poverty of Christ,” adding: “Only by becoming poor ourselves, by stripping away our complacency, will we be able to identify with the least of our brothers and sisters.” – Rappler.com