MANILA, Philippines – In the bible, Jesus approached a man who climbed a tree to get a glimpse of him when he couldn’t get near him to walk by his side. Jesus even visited his house in spite of the disapproval of his other followers.

At the Manila Cathedral on Friday, January 16, security officers blew their whistles and ordered two men who climbed trees inside the square fronting the church where Pope Francis delivered his first Mass in the Philippines.

The first man to climb a tree sat there in his blue jeans, rubber slippers, and white cap while the rest below watched him, including this writer, and noticed Pope Francis smiling on his gray shirt. In the flesh, the Pope arrived shortly after 11 am. The man waved a white handerchief and enjoyed what must have been a good view of the Pope entering the Manila Cathedral. 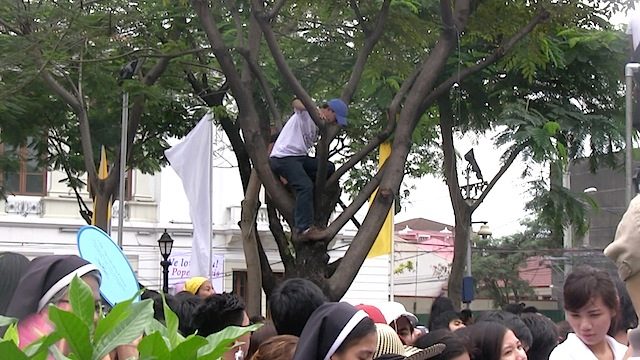 A few minutes later, a whistle was heard and he was ordered to go down. But he already got what he wanted.

Another man wearing a plain white shirt, black jeans, brown shoes, and a blue cap climbed another tree later. The whistle was heard again and the man reluctantly went down, and like the first man, disappeared into the crowd of a few hundreds inside the square.

Rob Brian Roque was not aware of what happened to the two men inside the square but when he saw the same trees, he had the same idea in mind. He was just outside the square, his photos on Facebook showed.

“Partly Undertstood today why Zacchaeus went up the tree to see Jesus,” he wrote on his Facebook page after the Mass. We’re publishing his post with his approval.

He told Rappler later: “I didn’t climb a tree but it was tempting to find higher ground. We couldn’t see him personally so we were just relying on the camera and the livescreen,” he said.

While he didn’t see the Pope, he said being there was worth all the trouble. “The energy and enthusiasm of the whole crowd was very moving. To feel the Spirit move through the crowd was more than enough,” he added. The gospel of Luke in the Bible tells the story of tax collector Zacchaeus, who people considered sinful. He wanted to see the growingly popular Jesus when he visited Jericho. A short man, and thus unable to see over the crowd, he ran to a tree and climbed it.

When Jesus saw him, he asked Zacchaeus to come down and then visited his house.

Outside the cathedral, the square was one of the most coveted spots from which to watch the livescreen and listen to the Mass. People crowded the sides where the Pope passed, going in and out of the cathedral grounds, but there were tiny spots where families were able to spread blankets and have small picnics.

Still, it was a busy day for the medics assigned inside. A number of people fainted during the Mass. It was busier outside.

Thousands also continue to mass up in Metro Manila roads and the perimeters of the Pope’s engagements to try to get a glimpse of him who gained rock star status because of his charisma.

The Metro Manila Development Authority (MMDA) said up to one million people came out to the streets to welcome the Pope on Thursday, January 15.

But the first two days of Pope Francis’ visit showed strict security protocols enforced by thousands of troops whose job is to make sure the crowd doesn’t get too near the Pope unless he himself goes near them.

It has prompted complaints from vendors in Luneta and pedicab drivers in Intramuros, who were banned from the areas during the Pope’s engagements. (READ: Feeling ‘unblessed’: Vendors evicted over papal visit)

Pedicab driver Mark regarded the security arrangements as discrimination against the poor, the sector closest to the heart of the Pope.

He lamented that this was supposedly the first time he was banned from the Cathedral. He blamed the government for allowing only the “rich people” to attend the Mass celebrated by the Pope. The “poor,” he continued, will be allowed only at the Luneta Park.

Mobile phone subscribers have also been complaining about disrupted signals. Smart said it was upon the orders of government.

The government has repeatedly sought the people’s understanding, highlighting the security challenges of the pope’s visit, especially in terms of crowd control and possible terrorist attacks. Mobile phones have been used to detonate bombs.

When Pope John Paul II visited the country in 1995, the government foiled Al Qaeda’s assassination plot against him.

For Pope Francis’s visit, tight security protocols meant quick drives from one event to another, sometimes depriving people, who waited for hours, the chance to see him.

It is far from the scenario in 1995 when Pope John Paul II visited the country. Back then, people were already touching the popemobile. The route from the airbase to the Papal Nunciature that took Pope Francis about 45 minutes on Thursday took Pope John Paul several hours 20 years ago.

Lucky people at Mall of Asia

The Pope has already attended 5 events in the first two days of his 5-day visit. It was at the Mall of Asia that many people had a close encounter with him.

For the first time, the pope deviated from his planned route to get close to the people waiting outside the mall. It was there that one of his guards carried a baby for him to kiss.

It was the same inside the mall, where he let many kiss his ring. He stopped to touch the sick, the kids, and the elderly.

On Saturday, January 17, the Pope will fly to Leyte, the focus of his trip. He will meet the victims of Typhoon Yolanda (Haiyan) and the Bohol earthquake. – Rappler.com