‘Pope in a Raincoat’ defines this papal visit 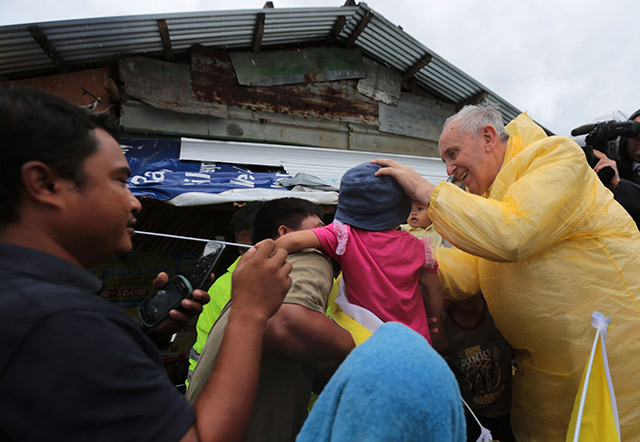 LEYTE, Philippines – A room in the Pope Francis Center for the Poor erupted in laughter on Saturday, January 17, as we watched the Supreme Pontiff emerge from the backstage the most unusual way.

In this room, more than two dozen of us watched the Mass of Pope Francis at the Tacloban Airport on Saturday.

The Mass was meant to comfort survivors of Super Typhoon Yolanda (Haiyan) in 2013, and ironically it was raining because of Tropical Storm Amang (Mekkhala). Amang – which, in Filipino, is another word for “father” – forced the Holy Father to wear a yellow plastic raincoat over his robes. It was my first time to see a Pope – or any priest at that – saying Mass in a raincoat.

I heard one woman saying, while laughing, “Only in the Philippines!” Her companion corrected her, “Only in Tacloban!”

I agree with them: It’s unique. Like St John Paul II playing with his cane at the Quirino Grandstand in Manila, it is also iconic. The Pope in a Raincoat defines Francis’ trip to the Philippines – a pope coming to join his people in suffering.

In the first place, Francis could’ve canceled his visit to Leyte. It’s not his fault that there’s a storm anyway. Visiting Yolanda survivors in Leyte, however, is the main objective of his trip to the Philippines. The Pope also stresses the need to help the poor “person to person, in the flesh.”

On Saturday, the Pope braved the rain but, due to the weather, made two adjustments: to shorten his Leyte events and to wear a raincoat over his vestments.

The Pope in a Raincoat broke the language barrier between the Pope who spoke much Spanish and little English, and the Filipinos who spoke little Spanish and much English. It’s an eloquent image that said three things disaster survivors need.

First is simplicity among their leaders.

Other VIPs would demand a special raincoat. Francis chose the ordinary – the same way he lives in a Vatican guesthouse and not in the more elegant papal apartments. Francis explained it best in his homily at the Manila Cathedral on Friday, January 16: “Only by becoming poor ourselves, by stripping away our complacency will we be able to identify with the least of our brothers and sisters.” (FULL TEXT: Pope Francis’ homily at the Manila Cathedral)

Second is solidarity. Francis felt he “had to be here” – as Jesus is here.

He told Yolanda survivors during his Mass in Tacloban: “Jesus always goes before us and when we pass an experience, a cross, he passed there before us. And if today we find ourselves here 14 months afterwards, 14 months precisely after the Typhoon Yolanda hit, it is because we have the security of knowing we will not weaken in our faith because Jesus has been here before us.” (FULL TEXT: Pope Francis’ homily, Holy Mass in Tacloban)

In a media briefing on Saturday evening, Vatican spokesman Fr Federico Lombardi relayed the Pope’s message: “The Pope said: ‘I’m here to show solidarity. If the people sacrificed under the rain, why should the pastor not be with them?’”

Francis’ simplicity and solidarity lead to the third, most important message that the Pope in a Raincoat sends: The love of Jesus through his vicar on earth.

It was always striking whenever the wind blowed through the Pope’s robes as the Pope chose to stay with Yolanda survivors. It reminded me of Jesus calming not only the storm – but also his disciples who freaked out because they lost faith in the Lord (Mk 4: 36-41). In another passage, when Jesus walked on the sea and his disciples thought it “is a ghost,” Jesus told them: “Take courage, it is I; do not be afraid” (Mt 14: 26-27).

Jesus said in the Gospels, “Take courage, it is I; do not be afraid.”

The Pope in a Raincoat said on Saturday, “I am here to be with you – a little bit late, but I’m here.” – Rappler.com