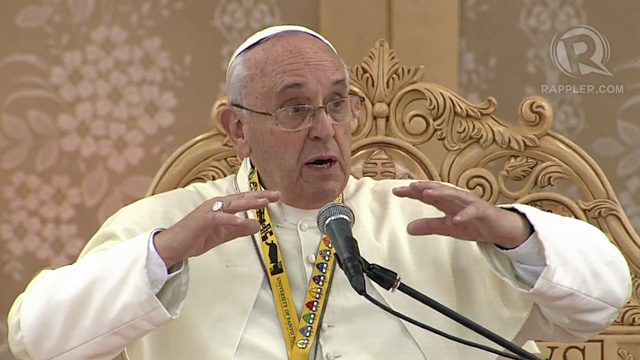 Facebook Twitter Copy URL
Copied
Speaking extemporaneously to the Filipino street children, Pope Francis says, 'The reality you have is superior to the paper I have in front of me'

MANILA, Philippines – Why did the head of the Roman Catholic Church again opt to abandon his prepared text, and speak to the Filipino youth candidly?

At the end of his address at the youth encounter in the University of Santo Tomas (UST) in Manila, Pope Francis explained why he decided to spontaneously respond to the testimonials of street children, and young students and professionals. (READ: Full text of the Pope’s message)

“I am sorry I have not read the prepared remarks but reality is superior to ideas,” Francis told thousands of young Filipinos gathered on Sunday, January 18. (READ: Full text of undelivered UST speech)

“And the reality you have is superior to the paper I have in front of me.”

Francis spoke after being visibly moved by the testimonials of the Filipino youth, particularly 12-year-old Glyzelle Palomar, who broke down while asking the pontiff about the poverty and prostitution children experience on the streets.

She asked him, “Why does God allow this to happen?” After embracing Glyzelle and listening to the testimonials of 3 other young Filipinos – a child who grew up on the streets, a law student, and an engineer – Francis began his remarks by asking permission from the crowd to speak in Spanish, with Monsignor Mark Gerard Miles translating his words into English.

Vatican expert John L Allen Jr said speaking extemporaneously in Spanish is “a vintage sign” that the Argentine pope is “truly engaged with the subject.”

Francis also spoke in Spanish in his moving homily in Tacloban before victims of Super Typhoon Yolanda (Haiyan) on Saturday, and in his meeting with Filipino families at the SM Mall of Asia Arena on Friday.

In UST, the Pope specifically addressed the questions and concerns of the 4 young speakers, mentioning them by name.

Francis said Glyzelle posed the one question that “no one can answer, and expressed in tears, not words.”

He then stressed the importance of crying, and denounced what he called “a worldly compassion that is useless.”

“When the heart is able to ask itself and cry, then we can understand something,” Francis said. “There is a worldly compassion which leads us to put our hands on our pocket and give something to someone.”

Yet the pope said the world “has a great lack of capacity of knowing how to cry.”

“It is only when Christ is able to cry that he understood what is going on in our lives. Those left on one side are crying. Those discarded are crying. But we don’t understand much about these people. Certain realities in life are seen through eyes cleansed with tears.”

Francis then returned to Glyzelle. “Let us learn how to weep as she has shown us today.”

The Pope spoke before young Filipinos, who comprise the bulk of the predominantly Catholic population. The Philippines has 80 million Catholics, the country with the 3rd largest Catholic majority in the world.

The pontiff is on the fourth day of his January 15 to 19 trip to the Philippines, the second leg of his second Asian trip meant to spread the faith in the continent as Catholicism declines in Europe and the United States. No ‘young museums,’ only surprises

The Jesuit pope also responded to law student and former UST central student council president Leandro Santos II, who asked the Pope how the youth in a country obsessed with social media can have “values” while being “distracted” by technology.

The Pope said technology is “not necessarily bad” but warned against what he called “young museums.” (READ: Pope to youth: Gadgets good but there is danger)

“We run the risk of becoming museums of young people who have everything but don’t know what to do with them,” the pope said. “This is the most important subject you have to learn in university, in life: to learn how to love.”

The Pope said the youth must use all 3 “languages” of thinking, feeling and acting, with their mind, heart, and hands.

“God is a God of surprises because He always loved us first. He awaits us with surprise. Let us not have the psychology of the computer to think we know it all. All responses on the computer screen are no surprise. God reveals Himself through surprises,” he said.

“So no young museums, wise young people. To be wise, allow yourselves to be surprised by the love of God. That will guarantee a good life.”

‘Allow yourself to receive’

Francis then addressed the testimonial of UST alumnus and electronics engineer Rikki Macolor, who invented a solar night light for Yolanda survivors.

The Pope said Rikki gives to others but must ask whether he allows himself to receive.

“To become a beggar, this is what you lack. To learn how to beg. This isn’t easy to understand.”

He then asked Rikki and the rest of the young Filipinos a series of questions.

“Do you think for the poor, feel for the poor, do something for the poor? Do you ask them to give you wisdom? Do you know that you too are poor, and have the need to receive? Do you let yourselves be evangelized by those you serve?”

The first pope from the developing world, Francis highlighted a key theme of his papacy: reaching out to the poor and the neglected, what he calls “the peripheries.”

“To learn how to receive with humility. To learn to be evangelized by the poor, those we help, the orphans. This is what helps you mature in your commitment: to learn to offer out your hand from your very own poverty.”