Tagle on PH missionary calling: ‘It is the time of the heirs’ 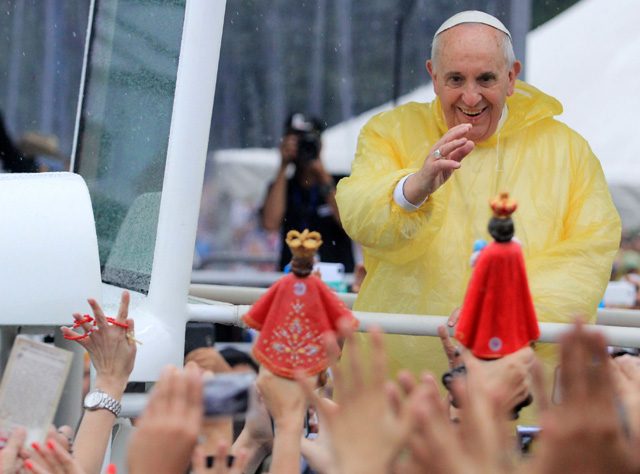 Facebook Twitter Copy URL
Copied
The Philippines is bringing the Catholic faith back to Europe, from where it came, and overseas Filipino migrant workers are a big part of that missionary presence

MANILA, Philippines – It was Spain that brought Christianity to the Philippines centuries ago, eventually paving the way to make it Asia’s largest Catholic country.

Now, with the West facing emptier pews, it’s time for the “heirs” to become missionaries themselves and bring the faith back to Europe, Manila Archbishop Luis Antonio Cardinal Tagle said on Sunday, January 18, the last full day of Pope Francis’ visit to the Philippines.

In his concluding Mass in Luneta, the Argentine pontiff urged Filipinos to be “missionaries of the faith in Asia,” noting that being the “foremost Catholic country in Asia” is both God’s blessing and a vocation.

“He chose us, each of us, to be witnesses of his truth and his justice in this world,” Francis said in his homily.

In response, Tagle promised the pontiff that Filipinos would go with him “to the peripheries…to bring the light of Christ.”

In a press conference after the Mass, Tagle was asked if it is now Asia coming back to Europe to “give back the faith.”

The Manila archbishop replied: “With pride we say that.”

He also cited an expression used by the Federation of Asian Bishops’ Conferences.

“They said, it is the time of the heirs. We have received a legacy, an inheritance. You don’t use it only for your own advantage. You share it with others, you share it even with those who have given you a legacy,” Tagle said.

“We have received. Now it’s time to share,” he added.

In response to another journalist’s question on the Philippine Church’s evangelization work, Tagle said that Filipino priests have been working in different parts of the world, and there have been efforts to “awaken in the Filipino church this missionary call.”

But he also said that there is a big layman force behind the Church’s missionary work: overseas Filipino workers (OFWs).

Tagle added that OFWs even form a big part of the Catholic Church in other countries.

“Our overseas Filipino migrant workers have become the big missionary presence…. Without meaning to, they bring their faith also,” Tagle said. – Rappler.com