Some pilgrims go home ‘disappointed’ for not seeing Pope Francis

Jan 19, 2015 8:25 AM PHT
Rappler.com
Facebook Twitter Copy URL
Copied
How do some pilgrims feel after coming home without seeing the Pope?

MANILA, Philippines – Bad weather and huge crowds prevent some pilgrims from seeing Pope Francis during his visit to the Philippines. After coming all the way to Manila for a sighting of the Pontiff, how do they feel coming home empty handed? 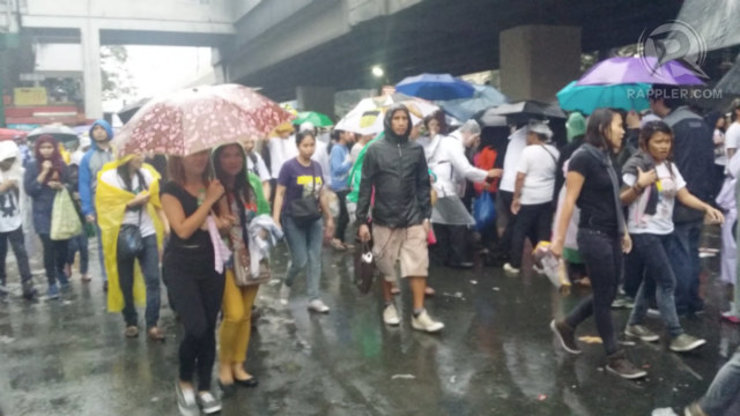 The bad weather and the millions of people present made it impossible for all the Catholic faithfuls present here in Luneta to hear Pope Francis’ Concluding Mass. Some pilgrims go home disappointed – they neither saw the pontiff during his motorcade nor even heard his message.

Some families in Luneta chose to stay inside establishments to escape the rain and some even went home.

As early as Saturday morning, many pilgrims already camped in areas near Quirino grandstand. They endured the cold night and hours long wait just to get a glimpse of Pope Francis.

One devotee tells us the hardships she went through just to see Pope Francis.

Tomorrow, Monday, January 19, Pope Francis returns to Rome. It’s not yet sure whether the Charismatic Catholic leader will visit the Philippines again. If he decides to do so, those who missed the chance to see him this year will welcome him with open arms. David Lozada, Rappler, Manila. – Rappler.com