Pope Francis: A symbol of hope and contradiction

Jan 19, 2015 2:55 PM PHT
Ric Caliolio
Facebook Twitter Copy URL
Copied
'Pope Francis represents the best and the worst of Catholic faithful. He is, after all, every Catholic combined' Personally, I am not giving the papal visit much thought. What I only know from the top of my head is that this visit will be considered a national holiday and that MMDA officers are required to wear diapers while on duty.

I really appreciate Rappler for acknowledging that our country is the home to people outside the majority (i.e., the Catholics) and that the opinions of these minorities matter. This practice of collecting as many perspectives from as many different angles as possible is one of the primary foundations of rational thought that most of us, atheists and secularists, adhere to.

So what is the significance of Pope Francis for me?

From my world view, Pope Francis has no tangible authority and is nothing but a symbol. He is both a symbol of contradiction and a symbol of hope within and for the Catholic Church and its members.

If all Catholic members will be merged into one being, that would be Pope Francis. 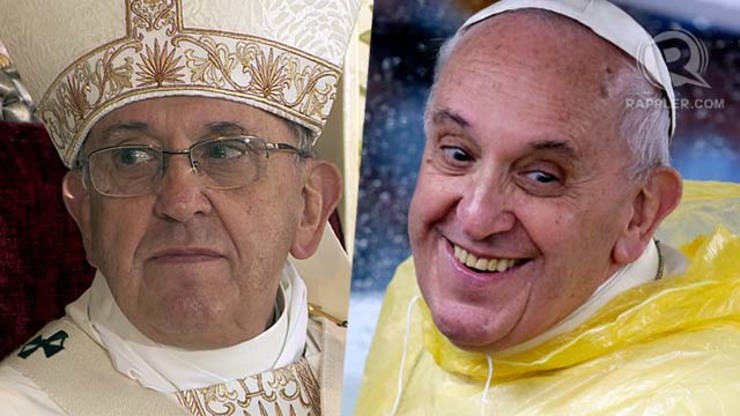 As pointed out in a recent Filipino Freethinkers article, Pope Francis, on his own, has shown so much contradiction that, at face value, makes it difficult to deduce what he really stands for.

Is he liberal? Is he conservative? Does he really support the lesbian, gay, bisexual, trasngender (LGBT) community in their fight for equal rights and against oppression? Will he really take tangible action against the child rapists within their ranks? Is he willing to give women the same equal rights and authority as men within the church?

(READ: Pope Francis: Who am I to judge?)

The contradictions are even more emphasized when the Vatican authorities come into the picture. Pope Francis will say one thing and he will do another, or the Vatican will publish an announcement that will disclaim or rectify what the public undestands of what the Pope recently said.

Quoting the Filipino Freethinkers, “We see a pattern in Pope Francis’ Church—vague but impressive words, followed by clear but contradictory actions.”

These contradictions are not really limited to the Catholic Church’s higher authorities as these are also visible within their ordinary members.

I have no official statistics on hand but based on my observation as a former Catholic, the members of this religion has the most diversity in opinions and principles.

Some members are very liberal that they accept gender diversity, help fight for LGBT rights, support reproductive health, and are very tolerable of other religions or even of the irreligious. Some members, however, are conservative fundametalists who exhibit the same behaviors as the members of the Westboro Baptist Church.

Fortunately, I am seeing more and more Catholics exhibiting a liberal inclination. This is probably because most fundamentalists leave Catholicism and convert to other Christian sects that can cater to their fundamentalism.

The Pope’s [perceived] liberal statements are being applauded and emphasized more than his relatively-ignored conservative statements. Thus, I cannot help feel that these liberal views are now the popular opinion. If this is indeed true, it would not be long before the Catholic Church will change its stance on the matters stated above in the same vein that the they are now acknowledging science as the better tool in interpretating natural phenomena.

This display of principles contradicting traditional Catholic dogma gives me a glimpse of hope that the Catholic Church, as a whole, will soon transform into a more liberal religion.

A religion that will give more priority to human rights and rational thought. I believe and I hope that this can and will happen within two or three generations. – Rappler.com

Ric Caliolio is the Vice President of the Philippine Atheists and Agnostics Society, Inc. (PATAS), a social organization that provides social action to promote public understanding of atheism and agnosticism in the country. It stands for reason, science, humanism, and the secularization of our nation.