PODCAST: Presidency or nothing for Duterte 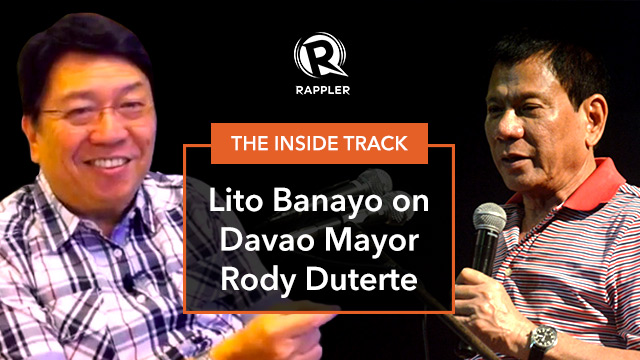 MANILA, Philippines – The man who transformed Davao City from a no-man’s land to one of the safest, if not the most disciplined, cities in the country, is not going to settle for anything less.

It’s the presidency or nothing for Mayor Rodrigo Duterte, or so says his political adviser and strategist Angelito Banayo.

In the first part of this interview, Banayo says Duterte, whose numbers went up in the March Pulse Asia survey with 12 percentage points, is still testing the waters by going around the country before he throws his hat into the presidential derby.

Banayo, who had been involved in the presidential campaign of the late former president Corazon Aquino, former president Joseph Estrada, and President Benigno Aquino Jr (in 2010), predicts the Lee Kuan Yew of Davao City will trump potential rivals in Mindanao, with 75% of the Muslim votes going for Duterte.

An internal survey Banayo commissioned showed that Duterte’s numbers have jumped to 14 percentage points in a later March survey. If his numbers continue to improve, then Duterte might just take the plunge.

A Social Weather Stations top-of-mind survey, in fact, shows Duterte hitting 15%, reflecting a 10-percentage point increase from his 5% in December 2014. He was tied with Interior Secretary Mar Roxas in that presidential survey.

What are the challenges in running a Duterte presidential campaign? How will a final decision be reached? What are the major issues he’s going to confront? How is he going to deflect allegations of human rights violations? Let’s listen in. – Rappler.com

Listen to Part 1 of the interview above.

You may want to listen to episodes you might have missed: