MANILA, Philippines - Even as the Corona impeachment trial comes to a close Tuesday, May 29, controversy continues to hound the Chief Justice. He appears to have a penchant for using vehicles registered under the names of controversial personalities.

His black Chevrolet Suburban, a sports utility vehicle he used to travel to and from the Senate – when he appeared on May 22 and 25 before the impeachment court – is being linked to questionable transactions and persons.

Another black suburban he used in January 2011 was registered under the name of a wealthy businessman.

Between 2010 to 2011, a Newsbreak investigation (prompted by a tip that a litigant with a case pending before the Supreme Court was allowing him use of an expensive vehicle) found that plate number ZWK 111 was registered under the name of Wilfredo Keng, a Filipino-Chinese businessman dubbed by Forbes Magazine as one of the richest Filipinos in 2010. The investigation was also part of research for Marites Dañguilan-Vitug's upcoming book on the High Tribunal. 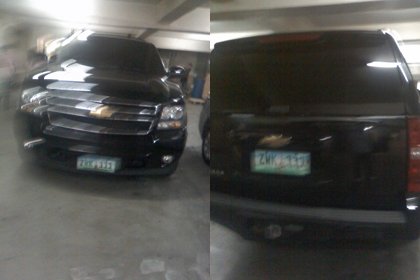 In a Monday, May 28 phone interview with Keng, who said he was in China, the businessman admitted owning a suburban with plate number ZWK 111. He insisted, contrary to LTO documents, that his vehicle was not the one found to be used by Corona in 2011. Neither does he own the black Suburban used by Corona in the Senate last week.

Supreme Court sources said they had seen Corona regularly use the black Suburban owned by Keng in both official and non-official functions in 2011.

It is unclear how a plate number under Keng's name ended up being used by Corona. The luxury vehicle is not the one assigned to him by the Supreme Court as his service car. His assigned vehicle is a beige 1996 Toyota Camry with plate SEJ 953.

This is not the first time that the Chief Justice has been found using a car with a plate number belonging to another person. When he appeared before the Senate impeachment court, the vehicle he used -- coincidentally also a black Chevrolet suburban -- bore a plate number registered to a different type of vehicle, a Mitsubishi L300.

Supreme Court spokesman Midas Marquez said Corona was not aware of the circumstances surrounding the vehicle and the plate numbers.

At the time we were tracing the registered owner of the Chevrolet in early 2011, we got hold of an intelligence report that detailed Keng's past. Prepared in 2002, it described Keng as a "naturalized Filipino citizen" whose exact birthdate is unknown. In the report, he was also identified as bearing the alias "Willy," using a surname also spelled as "Kheng."

The report stated that Keng had been under surveillance by the National Security Council for alleged involvement in illegal activities, namely "human trafficking and drug smuggling." He is supposedly close to lawmakers and had contacts with the US embassy at the time.

The document also said Keng was involved in a murder case for which he was "never jailed." It could be referring to the death of Manila Councilor Chika Go in 2002 where Keng had been identified as a mastermind. Go was also the architect of Keng's Reina Regente condominium residence in Binondo, Manila.

According to a 2002 Philippine Star report, Keng was also accused of smuggling fake cigarettes and granting special investors residence visas to Chinese nationals for a fee. Keng has denied his involvement in this illegal transaction, saying it's easy to get visas to the Philippines.

In less than 10 years after the release of these reports, Keng has reinvented himself as one of the more reputable businessmen in the country. He was listed by Forbes as the 32nd richest Filipino in 2010 with a net worth of US$100 million.

One of his companies got involved in a courtroom battle, though.

Century Peak Corp, which is represented by Rapid City Realty and Development Corp, got the mining rights in the Surigao del Norte reservation after winning in 2009 a case filed in the Court of Appeals. Petitioner Corazon Liwat-Moya claimed to originally own the mining rights, but the court said that she had lost her rights for not heeding requirements.

On Friday, May 25, a certain Bonifacio Gomez Jr lodged a complaint with the Land Transportation Office (LTO), saying that the plate number of his vehicle, ZEE 868, is the same plate number attached to Corona’s black SUV which the latter used during his Senate testimony.

LTO registration papers show that the plate is registered to the Cebu-based company Nutripharm Inc, owned by Gomez.

Corona’s lawyers said he does not own the black suburban he used in the Senate and that he merely rented it.

Defense lawyer Judd Roy said Corona rented the “bullet-proof” vehicle from AutoTrend on Timog Avenue for “security reasons.” He described AutoTrend as one of the better companies for rentals of this vehicle type. A certain Reynaldo Pazcoguin owns AutoTrend.

The shop has been dragged in a smuggling issue, though. In 2007, authorities confiscated luxury vehicles found in the shop that were reportedly missing from the Subic port. The vehicles were said to be stolen from legitimate importers by two Korean nationals, and then brought to the shop to be sold.

Defense lawyer Tranquil Salvador III told reporters during a press conference Friday, May 25, that he did not know the details of the arrangement for Corona's suburban, except that it was rented. The discussion about plate numbers should be directed to whoever rented out the vehicle, and not the Chief Justice, Salvador said.

Latest developments from the Highway Patrol Group (HPG) of the Philippine National Police (PNP) reveal that the owner of the black suburban with plate number ZEE 868 is a certain Mark Anthony Lopez of Viking Haulers Inc, who claimed that the vehicle was imported from California in 2009.

Logie Santos, managing partner of Viking Haulers Inc, admitted to investigators on Saturday, May 26, that the vehicle is not registered. He added that they leased out the vehicle to the SC for P12,000 a day.

Pazcoguin of Auto Trend is also identified as president of Viking Haulers Inc. Reports reveal that he was slapped with smuggling and tax evasion cases last year for undervalued luxury cars in this shop.

The transfer of license plates from one vehicle to another is illegal as it violates the car registration law. The offense is punishable by a fine of P5,000 or imprisonment of 6 months, or both, depending on the court's discretion. - With reports from Aries Rufo/Rappler.com