(Editor's note: This story is republished from the Thinking Machines website which carries the original title, "Using Satellite Imagery and Nighttime Lights to Understand the Impact of COVID-19 across Southeast Asian Cities. This is the third in their series with the Asian Development Bank that explores the ways big data, artificial intelligence (AI), and machine learning can be used to craft development solutions during the pandemic.)

Remote sensing with satellite images has become an increasingly crucial data source over the years. As satellite images are taken with increasing frequency and geographic granularity, these sharper images can provide us with a surprising amount of data and be applied to a wide variety of uses.

For example, the early works of Henderson et al. (2012) and later Bruederle and Hodler (2018) showed how satellite images of light emissions in a given area is a reliable proxy for economic activity and other dimensions of development such as poverty, education, and health.

Other studies on nighttime lights have also proven it as a reliable proxy for urbanization patterns, socioeconomic indicators like population density and poverty, and the economic effects of natural disasters and social conflicts. It has also been used to understand past epidemics and the COVID-19 pandemic in regions in the PRC.

This article focuses on the use of nighttime lights in major Southeast Asian cities to understand the effects and impacts of COVID-19 lockdown measures (Figure 1). In particular, we explore how this near real-time and granular data source can help us understand how cities are affected by the pandemic, how economic activity has responded to the measures introduced, and how recovery is shaping up across the region.

We used publicly available nighttime lights images from the Visible Infrared Imaging Radiometer Suite (VIIRS) downloaded from Google Earth Engine and NASA Black Marble to measure the light intensity in 5 countries from February to August 2020, observing when this brightened and dimmed. We processed and filtered daily images for cloud coverage and aggregated the data to monthly averages. In looking at specific Southeast Asian cities, we use the University of Oxford’s Coronavirus Response Tracker (OxCGRT) which quantifies countries’ lockdown measures according to government, health, and economic indicators through a stringency index from 0 (least strict) to 100 (strictest) (Figure 2).

As expected, nighttime lights in most of Southeast Asia’s capital cities dimmed from February to April 2020, coinciding with various lockdown measures. Kuala Lumpur showed a -40% dimming in April 2020 compared to February 2020, while Bangkok lights dimmed by -19% and Manila’s by -22% over the same time period. From April to July 2020 – unsurprisingly – we found the brightness of lights did not recover consistently across these cities despite easing lockdown restrictions. While Kuala Lumpur showed brightening lights from April, we note Bangkok and Manila continued to dim and have not yet recovered by July 2020 when compared to brightness pre-COVID-19. In the following section we drill down further into these cities to better understand the patterns we are seeing from nighttime lights, alongside the effects and impacts.

After a prompt lockdown response followed by holidays and easing measures, Kuala Lumpur is showing a steady recovery in later months.

From March to April 2020, Kuala Lumpur’s lights dimmed coinciding with Malaysia’s national lockdown or "movement control order" (MCO) from March 18, 2020 (Figure 3). During this time, the OxCGRT stringency score spiked from 31 to 73. If we compare this to April 2019, nighttime lights in April 2020 were dimmer by -41%.

Despite the MCO, we found that nighttime lights across the city brightened from April to May 2020, coinciding with the month-long Muslim holiday of Ramadan which commenced on April 23rd, 2020 (Figure 4). Because of the nature of this religious holiday, social activities continued to the later hours, and therefore brighter nighttime lights during this period. In addition, by May 4, 2020 restrictions were eased to a "conditional" MCO (CMCO) to reactivate the economy (bringing the OxCGRT stringency score down to 69). From April 2020 onwards, nighttime lights continued to gradually brighten in and around Kuala Lumpur until August 2020.

As Malaysia entered into a recovery phase (RMCO) in June 2020 the OxCGRT stringency score continued to decrease to 57. While Malaysia did not impose a curfew on the general public, non-essential businesses were required to close by midnight during RMCO. Because VIIRS satellite images are taken between the local overpass time of midnight to near 1:30 am, this requirement covers this time period (source: Asia-Pacific Advanced Network). Yet despite this, nighttime lights had brightened from June to July 2020 in the two most populated commercial districts – Petaling and W.P. Kuala Lumpur – before the rest of the surrounding area by August 2020. One could infer that economic recovery is underway for Malaysia’s urban center in its RMCO phase.

Despite early response and one of the lowest COVID-19 case counts in SEA, Bangkok’s recovery is still hampered by declining tourism.

Prior to lockdown in Bangkok, there was a significant dimming from February 2020 in the religious spots of Bowon Niwet and Ban Bat and Thailand’s largest industrial port, Map Ta Phut. Meanwhile, there was already dimming in tourist spots like Samran Rat and Wat Arun. Thailand’s stringency score had already been rising since March 6, 2020 which could point to early response from authorities even before the announcement of lockdown. By March 26, Bangkok entered into a partial lockdown and by April 3, a 10 pm-4 am curfew imposed on the general public – unlike in Malaysia which was directed at businesses – brought the stringency score up to 77 (Figure 5). This curfew was implemented until June 15, 2020. 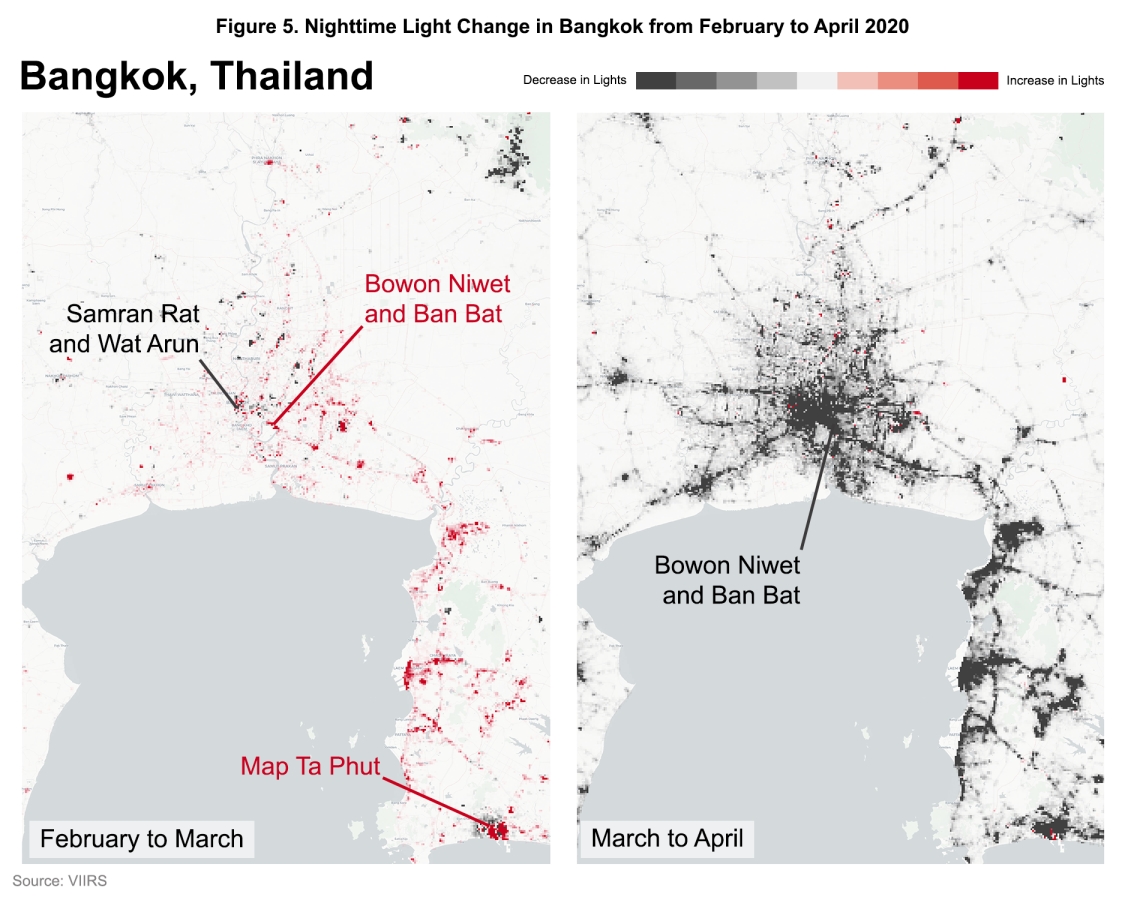 By July 1, most lockdown measures were eased and the stringency score fell to 49 (Figure 6). From June to July, although nighttime lights brightened again in Bowon Niwet as temples in the city opened up, we still see continued dimming throughout Bangkok, especially in Suriyawong, Wat Sommanat, and Khlong Maha Nak – popular tourist spots and dense residential areas.

Despite easing restrictions, nighttime lights in July 2020 are still -55% dimmer than July 2019 as there remain heavy restrictions on inbound international flights. The June 2020 ADB Asian Development Outlook Supplement adjusted its forecasted GDP contraction for Thailand from -4.8% to -6.5% for 2020, citing slumps in consumption, investment, and export as well as consumer confidence hampering the tourism industry. The ADO Update released in mid-September further lowered growth in Thailand, now projected to contract by -8%.

Analysis of nighttime lights alongside urbanization, poverty, and mobility data shows us a more granular and nuanced understanding of the strict and prolonged lockdown in the Philippines.

Combining nighttime lights with data from the 2017 Demographic and Health Survey (DHS) from the Philippine Statistics Authority (PSA) from 27,496 households nationwide, we found that wealthier urban areas in the Philippines are still affected by lockdown as nighttime lights continued to dim since February 2020 (Figure 7). In comparison, rural areas that ranked lower on the wealth index with more relaxed lockdown measures have shown some recovery in terms of the brightness of lights from April to August 2020. For the top 5% of the wealthiest clusters in the Philippines, there was a -112% dimming from February to August 2020, while the remaining 95% dimmed by only -22% over the same time period (Figure 8).

We also observed that while there was also a decline in urban nighttime lights from April to July last 2019, the decline this year was much sharper because of the pandemic. We also observe brightening lights in October and December of 2019, which could be an interesting point of comparison when the data becomes available. For instance, will lights brighten similar to 2019’s patterns or will the effects of COVID-19 continue to dim urban nighttime lights through the later part of 2020?

We attribute these patterns to lockdown measures. We observe both the urban clusters that show dimming, including the 33 of the 61 areas in Metro Manila representing the top 5% of the wealthiest clusters in the Philippines. For the rest of the country, most regions had more relaxed measures and/or had eased measures earlier, which could explain the recovering rural nighttime lights. Additionally, as the pandemic continues, it is unlikely to see a full recovery in nighttime lights to that of pre-COVID-19 patterns.

Extending our analysis one step further we looked at nighttime light patterns in Metro Manila alongside patterns of urban mobility – the latter of which we explored in a previous blog using the data from Waze Connected Citizens Program (CCP). From our findings there, we observed that Waze CCP mobility data gave us a granular look at the effects of lockdown on private vehicle travel patterns across cities, municipalities, and even roads in the Philippines, alongside the rise of local COVID-19 cases.

For this article, we compared traffic congestion on Waze CCP to the changes that nighttime lights can show us. We found that as Metro Manila entered lockdown or enhanced community quarantine (ECQ) and the stringency score spiked to 97, both traffic congestion and nighttime lights had declined from March to April 2020 (Figures 9 and 10). Under ECQ, an 8 pm-5 am curfew was implemented on the general public which increased the stringency score, and like Bangkok, this curfew also contributed to dimming nighttime lights activity.

By June 1, Metro Manila eased restrictions to general community quarantine (GCQ) bringing the stringency index score down but only to 78. At this time, traffic congestion began to increase but nighttime lights only began to recover in July and only slightly. We also found some exceptions to the nighttime light’s patterns. Despite the overall dimming of lights in Metro Manila, some municipalities remained much brighter throughout lockdown – the city of Manila, Pasay City, and Makati City, where popular tourist destinations, hotels and casinos, and central business districts are concentrated. This could point to varying levels of granularity in terms of economic activity where, despite easing restrictions allowing some mobility, Metro Manila’s nighttime lights show slower recovery for industries and the larger urban population. 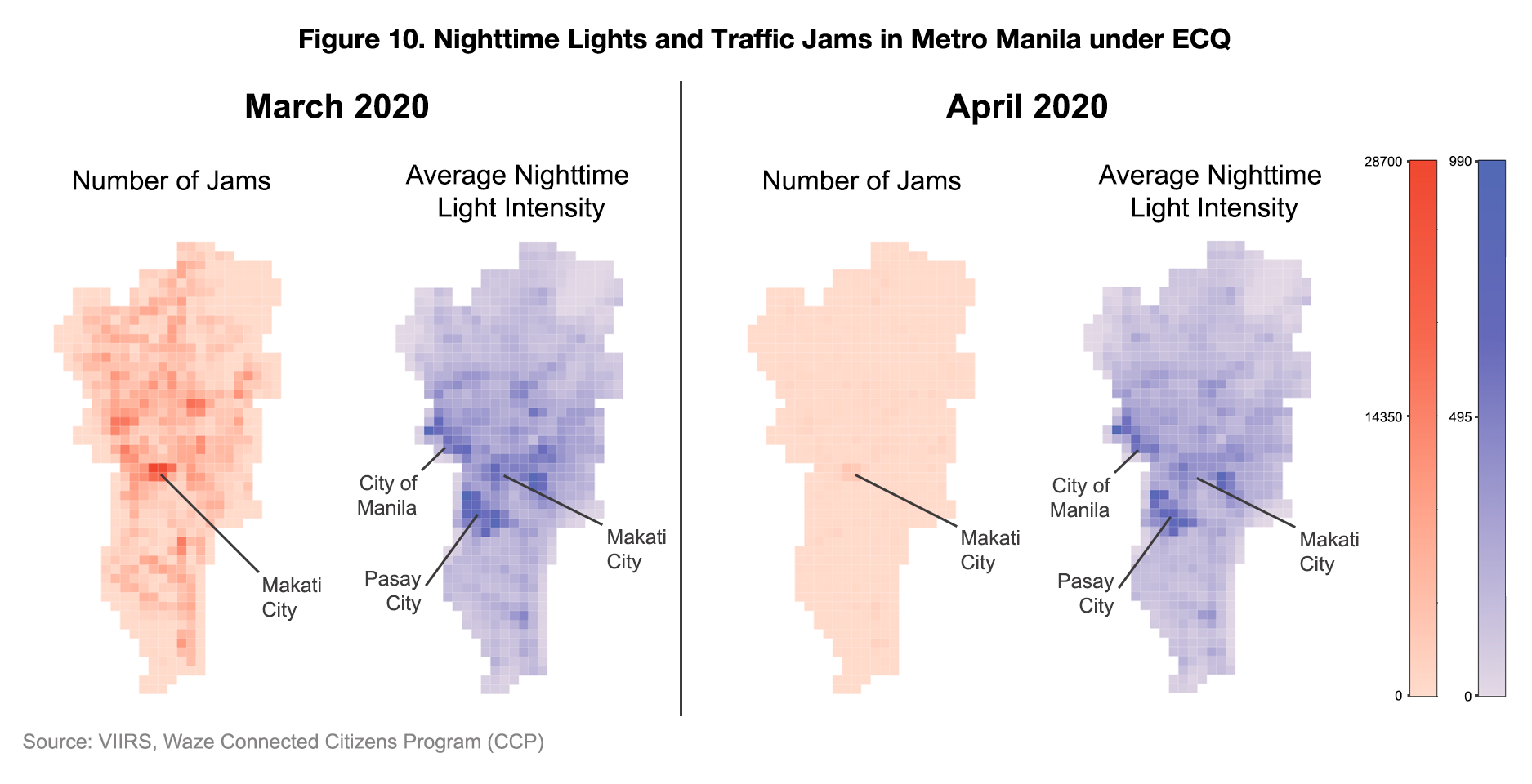 As we conclude, we note the underlying importance of the quality and granularity of the data and the role of nighttime lights as a data source to help us understand how cities like Kuala Lumpur, Bangkok, and Metro Manila, as well as household clusters within a country like the Philippines, are affected by lockdown measures. By supplementing this further with policy, economic, and mobility data, we can verify, localize, and further deepen insights on how these areas fare versus others.

Decision-makers can add nighttime lights to their resource repository for monitoring impact and planning towards recovery as we continue to develop our understanding of the effects of this pandemic around the world. – Rappler.com

Stephanie Sy and Anica Araneta from Thinking Machines and Hanif Rahemtulla, Bruno Carrasco, and Stella Balgos from the Asian Development Bank are the authors of this piece.