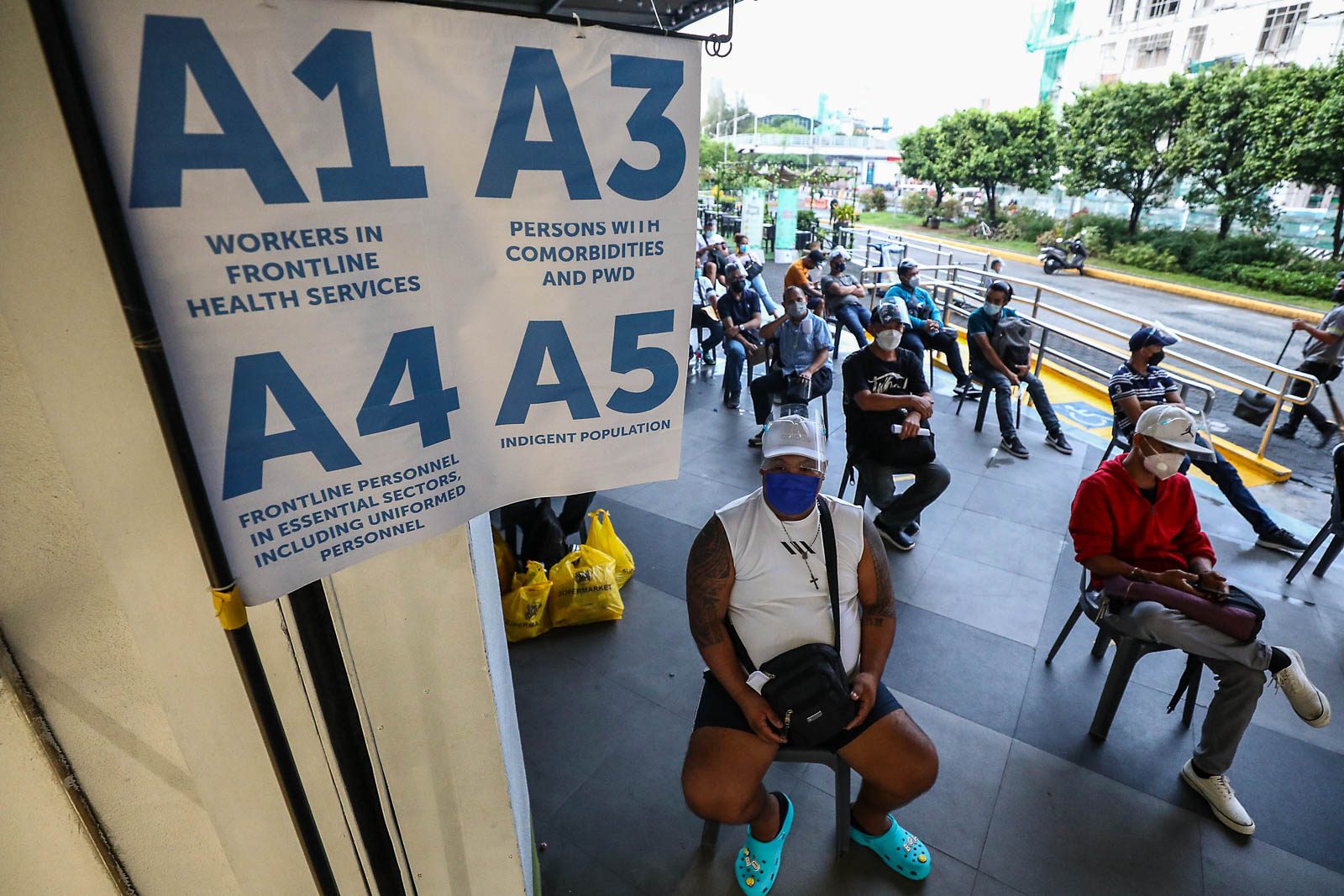 PATIENTLY WAITING. People fall in line outside a mall in Manila, which serves as a COVID-19 vaccination hub, to get their jab on June 22, 2021.

The 17 local government units (LGUs) in the National Capital Region (NCR) kicked off their COVID-19 immunization drive sometime in March 2021, after the Philippines received its first batch of vaccines from China’s Sinovac on February 28.

Since then, all localities that comprise the Philippines’ major economic hub have taken on the unprecedented task of inoculating more than half of their population, in an ambitious effort to reach herd immunity as soon as possible.

Here is the status of the vaccine distribution in LGUs in Metro Manila.

The table above shows the percentage of people who have been partially or fully vaccinated against the coronavirus out of the target population set by the LGUs.

The next table, meanwhile, shows the number of first and second COVID-19 vaccine doses administered per 100 people.

This table does not take into account the target population of LGUs, and instead uses the total population of each locality, based on the mid-2021 projection of the Philippine Statistics Authority.

The LGUs set their targets according to the government’s original goal of vaccinating around 70% of the Philippine population in 2021.

However, vaccine czar Carlito Galvez Jr. has since lowered the target to less than 50 million to 60 million Filipinos by yearend due to limited vaccine supplies.

The chart above shows the breakdown of vaccination figures per priority group, as provided by the LGUs in Metro Manila.

Since late June, the Philippines has greenlighted the vaccination of five priority groups, namely health workers (A1), senior citizens (A2), persons with comorbidities (A3), economic frontline workers (A4), and indigent Filipinos (A5).

Economic frontline workers, who comprise 35 million of the population, only started receiving the jabs on June 7.

The government’s strategy was to kickstart inoculations in places with high infections and significant economic impact. These include Metro Manila, six provinces in Luzon, Metro Cebu, and Metro Davao.

Overall, 7.5 million Filipinos have received at least one vaccine dose as of June 27. Of these, 2.5 million have received their second dose and are therefore fully vaccinated against COVID-19. – charts by Michael Bueza, with reports from Dwight de Leon/Rappler.com

Read Rappler's series of explainers on the Duterte government’s vaccine program below: