Jun 14, 2018 4:19 PM PHT
Rappler.com
Facebook Twitter Copy URL
Copied
The blog post contains a vlog about Senator Antonio Trillanes IV’s October 15, 2017 dare to President Duterte that says he would resign from the Senate if his allegations about the billions of pesos in Duterte's 17 bank accounts are proven false 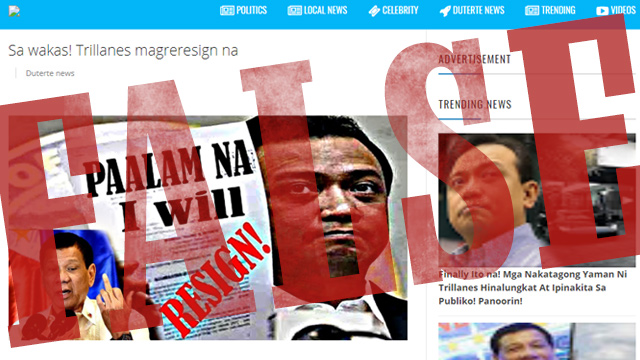 The blog post’s sole content is a November 30, 2017 YouTube video of the same title. It was uploaded by “PagBabago Ng Pinas” which has a following of 61,000 users. The channel’s content are a mix of videos with a misleading or false headline.

As of June 14, the blog post was shared by two Facebook pages which both accounted for a total of 711,577 followers and 450 interactions.

The facts: There have been no announcements that Trillanes will resign. No reports from credible news organizations support the claim. The video contained 2017 events.

Trillanes himself told Rappler via text, “That’s fake news. I will not resign.”

On April 29, 2016, the senator said that then presidential candidate and Davao City mayor Duterte had unexplained sums of P2.4 billion in 17 accounts in 3 banks from 2006 to 2015. Trillanes filed a plunder complaint against Duterte before the Ombudsman on May 5, 2016.

He then dared Duterte, now the President, on October 15, 2017, that he is willing to resign or be jailed if his allegations are proven false. (READ: Duterte SALNs don’t match alleged bank accounts)

The Ombudsman terminated the investigation into the plunder complaint on November 29, 2017.

(You said that Mr Rodrigo Roa Duterte has an account with billions in the Bank of the Philippine Islands [BPI]. It was actually BPI who said there are no such accounts. You said, “If I cannot prove this, I will resign as senator.” Sir, why are you still in the Senate?)

After Tulfo’s portion, it cuts to a snippet of Trillanes’ October 3, 2017 privilege speech before the Senate.

In his speech, Trillanes reveals that the bank account details Duterte said were Trillanes’ foreign offshore accounts were sold by Daniel “Snooky” Cruz to Malacañang for P10 million. Duterte admitted on September 19, 2017 that he “invented” the bank accounts.

The blog weblogph.tk says in its company profile that it is their “responsibility to deliver reliable articles and avoid false information.” Similar to other “fake news” blogs Rappler has checked, it also does not name their authors nor show the editorial board. – Miguel Imperial/Rappler.com