Jun 25, 2018 6:31 PM PHT
Rappler.com
Facebook Twitter Copy URL
Copied
The video is an interview with Justice Secretary Menardo Guevarra. He did not mention this claim in that interview 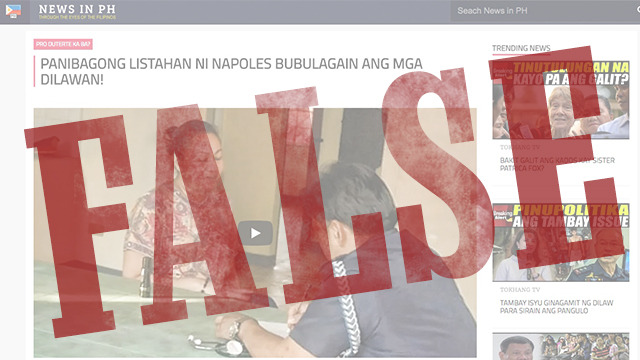 The video itself is an interview on CNN Philippines’ The Source, where Justice Secretary Menardo Guevarra talks to host Pinky Webb about Napoles, among other topics.

The video was originally posted on CNN Philippines’ YouTube channel on June 20 with the title “EXCLUSIVE: The Source: DOJ Secretary Menardo Guevarra.”

The facts: There have been no official reports that Napoles has named new people involved in the PDAF scam as of this posting. (READ: Napoles tags Drilon, Trillanes, De Lima in PDAF scam)

On The Source, Guevarra and Webb talked about the possibility of Napoles becoming a state witness. Guevarra said that he is open to hearing her testimony if it is necessary to gather more evidence. He did not name anyone who was involved in the case.

Guevarra added that the National Bureau of Investigation (NBI) is leading the probe into Napoles’ case. “The investigation is ongoing. The case build-up is ongoing,” he said.

Videos from the Pro Duterte Ka Ba? YouTube channel have been used for fake news stories before. Among these are false claims that Senator Leila de Lima will be transferred to Bilibid prison, that she may be served the death penalty, and that Senate President Vicente Sotto III said Davao City Mayor Sara Duterte was the only deserving replacement for her father President Rodrigo Duterte.