MISLEADING: ‘Trump congratulates Duterte for 40% down in drugs’

Jun 30, 2018 7:59 PM PHT
Rappler.com
Facebook Twitter Copy URL
Copied
While the US President announces better US-Philippines relations in the embedded video, he did not cite a 40% 'down in drugs' 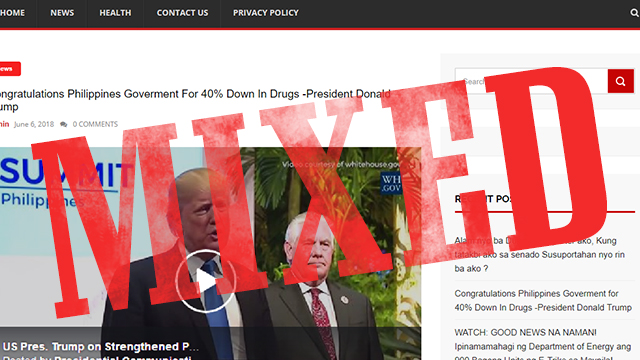 Claim: US President Donald Trump congratulated Presdident Rodrigo Duterte for the “40% down in drugs.”

In its June 6 post, blog goodnewstoday.d30.club ran the headline, “Congratulations Philippines Government For 40% Down In Drugs – President Donald Trump.”

The post’s text content was lifted from the Presidential Communications Operations Office’s (PCOO)  Facebook video post of Trump’s speech on November 15, 2017. It also failed to clarify what “down in drugs” meant.

The post referred to Trump’s statement after the 12th East Asia Summit at the Philippine International Convention Center in Pasay City on November 14, 2017. In that statement, he did not talk about drugs nor crime in the Philippines.

The facts: Trump said Duterte is doing a “great and sensible job” in curbing drugs and criminality, according to then Presidential Spokesperson Ernesto Abella on May 2, 2017. No exact figure was stated.

In the embedded video, Trump celebrated the “very strong” US-Philippines relationship. He called Philippines the “most prime piece of real estate from a military standpoint.”

The full transcript of the speech is available at www.whitehouse.gov.

The only reported instance Trump himself congratulated Duterte on the administration’s anti-drugs operations was on April 29, 2017. “You are doing an amazing job,” Trump said to Duterte according to the leaked transcript reported by US-based investigative magazine The Intercept on May 24, 2017.

This kind of hoax content is not new. From French President Emmanuel Macron’s “role model” to Vatican’s Pope Francis’ “blessing,” Rappler has checked various false claims in which a head of state praised Duterte. (READ: 10 tips on how to spot fake news from Facebook)

There have been other hoax stories regarding crime in the Philippines. The most recent is claiming the “anti-tambay” operations led to a decrease in Metro Manila’s crime incidence, when no official reports have been released yet.

The blog lacks an editorial board and a company profile. It does have its contact details and an “admin” author in all of its posts since its first on May 9. – Miguel Imperial/Rappler.com