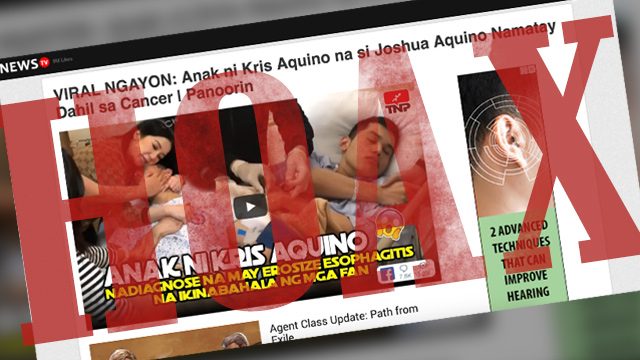 There are no timestamps in the said posts, but Facebook’s fact-checking dashboard said it was first posted on Facebook on July 21.

He was indeed rushed to St. Luke’s Medical Hospital in Quezon City on July 18, reported ABS-CBN News and PEP.ph. Josh was diagnosed with “erosive esophagitis due to severe acid reflux and ulcers.”

In the post, the embedded video – uploaded by TNP Media on July 19, featuring a video from Kris Aquino’s Instagram account – is of Josh being treated by doctors, but it is not his “final moments” as claimed by the hoax.

He has since recovered, and doctors have given him a clean bill of health.

Josh is very much alive in his mother’s Instagram posts on Monday, July 23, where he was joined by TV host Willie Revillame. Revillame paid Josh a visit in the Aquinos’ home, and took him out for a spin in a Ferrari.

Suspicious posts that circulate these death hoaxes are similar to what Rappler has checked before, like in the cases of actor John Lloyd Cruz and singer Gary Valenciano.

These websites do not have a homepage, and possibly compromise the users’ online accounts when it asks them to share the post to watch the rest of the video. In some cases, some of these websites even change content over time.

We warn readers against opening and/or sharing these hoax articles. Sensitive topics like deaths – especially of public personalities – should be supported by valid news reports, which verify such information through official sources like family members or the police. – Michael Bueza/Rappler.com