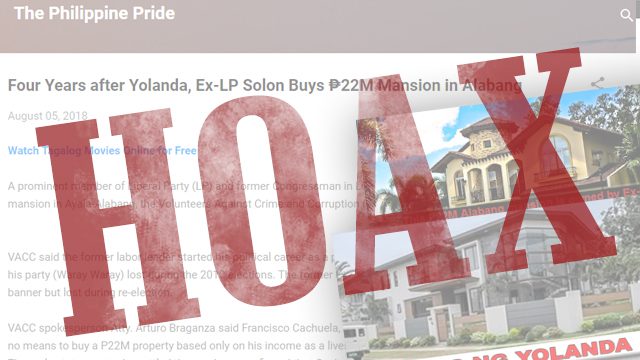 Facebook Twitter Copy URL
Copied
This story is pure fiction. Both the alleged congressman and the lawyer who pointed out the 'issue' do not exist

Cachuela was supposedly a “party list representative” from “Waray Waray” party list who then joined the Liberal Party (LP). He supposedly served from 2010 to 2013 under LP, but lost his reelection bid.

A lawyer named Arturo Braganza, a spokesperson of the Volunteers Against Crime and Corruption (VACC), supposedly pointed out the issue. He said that Cachuela “has no means” to buy the said property “based only on his income as a livestock trader.”

The post has been shared 4 times in different Facebook pages and groups. All of these accounted to a combined total of 317 interactions and 283,952 followers.

The 2017 posts did not mention the name the alleged congressman.

The facts: There is no Congressman Francisco Cachuela. There is also no Arturo Braganza in the Supreme Court’s list of lawyers.

Cachuela’s name is not in the list of district representatives for the 15th Congress which is featured in the website of the House of Representatives. Comelec records show that nobody by the name of Francisco Cachuela ran in 2010 and won as representative for the 1st district of Leyte, which includes Tacloban City.

It is Ferdinand Martin Romualdez, a member of Lakas-CMD, who held that position from 2007 to 2013.

Meanwhile, there is also no Arturo Braganza in the roll of attorneys in the Supreme Court’s website. As for the embedded photo of the supposed Alabang mansion, a Google reverse image search shows the photo used is a thumbnail of two results from photo-suit.com. The image of the house in the 2018 post is different from the 2017 posts. Running the image through reverse image search also shows results as photographs of different suburbs. It also shows the pinoybuzzfeed.com and dailybuzzph.com posts.

The post also said that Oxfam International and World Health Organization (WHO) “recently released” a report that “more than 60% of the donations to Typhoon Haiyan victims were lost and wasted.” Oxfam confirmed to Rappler that there was “no such report published” by the organization.

The blog phnewspride.blogspot.com was also responsible for posting a death hoax of Jet Li. And typical of shady blogs that Rappler has checked, the blog does not have authors, company profile, editorial board, or contact details. — Miguel Imperial and Michael Bueza/Rappler.com