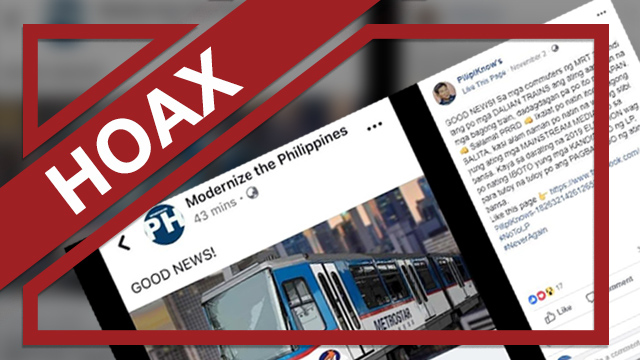 Claim: Aside from the Dalian trains, the MRT3 will use new trains from Japan.

The post included a screenshot of another page, “Modernize the Philippines,” sharing an article from taxial.com entitled, “Commuters to experience ‘brand new’ MRT3 by Japan –DOTr.”

Its caption praised President Rodrigo Duterte for the “brand new” Japanese trains. It also asked readers not to vote for Liberal Party candidates in the 2019 elections.

The facts: There are no new trains from Japan, only a funded rehabilitation for MRT3.

“There’s no truth to that. That’s not even part of any discussion,” Department of Transportation (DOTr) communications director Goddess Libiran told Rappler.

The taxial.com article, which was the source of the Facebook post of PilipiKnow’s, is based on a November 2 GMA News article about the MRT3 rehabilitation – “Expect ‘brand new’ MRT3 after Japan-funded rehab, says DOTr exec.”

DOTr Undersecretary for Railways Timothy Batan said in an interview on GMA News TV’s News to Go that after the rehab, commuters can expect a “brand new” MRT3. The taxial.com article, however, ran with a headline different from the GMA News article.

More accurately, the “brand new” MRT3 will be experienced after the Japan-funded rehabilitation. It’s not true that the MRT3 trains were by manufactured by or came from Japan.

On October 27, the MRT3 deployed the first batch of trains from Chinese state-owned firm Dalian Locomotive. These were bought in June 2013 as part of the MRT-3 Capacity Expansion Project. Due to weight incompatibility issues, the trains were parked until a July 2018 audit declared them fit for use.

According to the National Economic Development Authority, the rehabilitation will “increase the number of trainsets in operation from 15 to 18 trainsets per hour, increase the maximum speed to 60 kilometers per hour, and decrease headway to 200 seconds.”

The DOTr project “is part of the agency’s strategy for restoring, upgrading, and regularly maintaining the MRT 3 over the long term.”

This is not the first false claim we fact checked regarding the MRT3 expansion project. Rappler has checked a claim saying Duterte has acquired 48 “brand new trains” for MRT3 in less than a year.