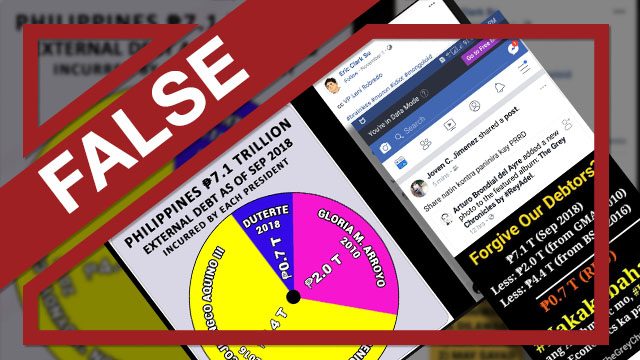 Facebook Twitter Copy URL
Copied
(UPDATED) Since the national debt is a 'running total' of how much the country still owes, comparisons should show the 'net addition' to the debt for certain periods, not the supposed 'shares' of debt incurred by each president

Claim: President Benigno Aquino III incurred P4.4 trillion in debt during his term, supposedly a huge “share” of the country’s P7.1-trillion debt as of September 2018.

This claim was visualized in a pie chart, which also showed that Aquino’s predecessor Gloria Macapagal Arroyo incurred only P2 trillion in debt, while current President Rodrigo Duterte has incurred only P700 billion so far.

The pie chart was circulated and shared on Facebook by some pages and accounts that support the President, including Bistado Pilipinas and Sass Sasot. The pie chart and other similar claims were circulated after Vice President Leni Robredo demanded on October 28 that Duterte explain the country’s trillion-peso debt.

Another version of this pie chart appeared in March 2019 on the Facebook page Blessed Be Philippines. Citing figures “as of February 2019,” the chart said Aquino incurred P4.2 trillion, Arroyo P2.2 trillion, and Duterte P1.1 billion. Readers emailed these claims to us for verification.

The facts: The way the numbers on the national debt across different administrations was presented in a pie chart is wrong.

As of January 2019, the outstanding cumulative debt of the national government stands at P7.49 trillion. Of the amount, P4.91 trillion is domestic or local debt, while P2.58 trillion is external or foreign debt. The amount does not include P487.3 billion in guaranteed debt, or contingent liabilities handled by government if a state agency fails to pay for its debts on time.

In general terms, a government’s outstanding debt consists of the unpaid balance of loans and debt securities – whether domestic or external – explained economist JC Punongbayan. It is best understood as a “running total” of how much the country still owes, he added.

As such, it is inaccurate to show the country’s debt as a “share” incurred by each president, as the claim did via a pie chart.

Asked by Rappler about the claim, Punongbayan pointed out that the pie chart only took into account the debt under 3 presidents: Arroyo, Aquino III, and Duterte.

The Bureau of the Treasury has data for the national debt since Corazon Aquino’s presidency in 1986, so it is wrong to attribute 100% of the debt to only 3 presidents.

Treasury data shows how much the debt was at the end of each year.

Comparisons among presidents should show the “net addition” or “net increase” to the debt during their respective terms. “Note that at any point in time, new debt is incurred as old debt gets paid,” said Punongbayan.

For instance, in December 2000, the last available data from the Treasury before Arroyo assumed office in January 2001, shows that the government’s outstanding actual debt stood at P2.167 trillion. At the end of her term in June 2010, it went up to P4.582 trillion. Thus, the net addition to the debt after Arroyo’s 9-year term was P2.416 trillion (rounded off).

At the end of Aquino’s term in June 2016, the outstanding actual debt increased to P5.948 trillion. The net addition to the debt after Aquino’s 6-year term was P1.366 trillion.

With the outstanding debt at P7.494 trillion as of January 2019, the net addition under Duterte’s term so far (two years and 7 months) is P1.546 trillion.

(Including guaranteed debt, the total debt as of January 2019 is P7.981 trillion, or a net increase of P1.470 trillion under Duterte’s term so far.)

Punongbayan added that a better tracking of the national debt is through the debt-to-GDP ratio, or the comparison of the debt to the country’s income or gross domestic product (GDP). A lower debt-to-GDP ratio suggests that the country has better capacity to pay off its debts.

“Our debt, when compared to the productive capacity of the economy, is actually becoming smaller over time,” Punongbayan told Rappler.