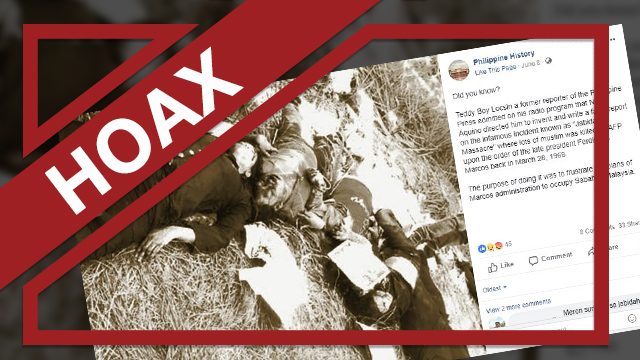 Facebook Twitter Copy URL
Copied
The massacre is well-documented. Locsin himself tweeted in 2016 that it was authorized by an officer in the defunct Philippine Constabulary.

Claim: In a radio show, Teodoro “Teddyboy” Locsin Jr said that back when he was a reporter for the “Philippine Press,” former senator Benigno “Ninoy” Aquino Jr. “directed” him to falsify a report on the Jabidah Massacre.

Teddy Boy Locsin a former reporter of the Philippine Press admitted on his radio program that Ninoy Aquino directed him to invent and write a false report on the infamous incident known as “Jabidah Massacre” where lots of Muslim was killed by AFP upon the order of the late president Ferdinand Marcos back in March 28, 1968.

The purpose of doing it was to frustrate the plans of Marcos administration to occupy Sabah in Malaysia.

The original claim was from lawyer Larry Gadon, now a senatorial candidate, and was published in The Daily Tribune on November 7, 2015. An earlier version was also posted by Facebook page “Showbiz Government” on March 23, 2013, also citing a March 2013 Tempo  article which also cites Locsin’s supposed confession. Both articles have been deleted from these sites, but copies still remain in Wayback Machine, a web archive service.

According to the Tempo article, Locsin made the claim during a March 19, 2013 DWIZ Karambola radio show. (READ: FAST FACTS: Who is DFA chief Teddyboy Locsin?)

The facts: The Jabidah massacre is well-documented.

Locsin himself said in a 2016 post on Twitter that it was slain Constabulary colonel Rolando Abadilla who authorized the training of the Moro recruits in a special operation called Oplan Merdeka, and that the late dictator Ferdinand Marcos was “stunned” that his “infiltration force” was “massacred.”

@thysz @cesdrilon No. That was done by Abadilla in a fit of rage. Marcos was stunned that his infiltration force into Sabah was massacred.

What became known as the Jabidah Massacre is the killing of Moro recruits by members of the Philippine armed forces on March 18, 1968, on Corregidor Island. The number of those killed is disputed until now. They were trainees of the Philippine military who were supposed to infiltrate Sabah, an island state in Malaysia that the Philippines is also claiming, upon the orders of Marcos.

Rappler editors Marites Dañguilan Vitug and Glenda M. Gloria wrote an entire chapter on the massacre in their 2000 award-winning book, Under the Crescent Moon: Rebellion from Mindanao. (READ: Jabidah and Merdeka: The inside story)

In a Senate hearing held on March 18, 1968, sole survivor Jibin Arula testified about the massacre.

Following Arula’s testimony, then senator Benigno “Ninoy” Aquino Jr. delivered a privilege speech on the issue on March 28, 1968. “There have been some killings, yes. But these are killings that come under the heading of murder. And, for this, the guilty must be hauled before our justice and made to account and to pay,” said Aquino. 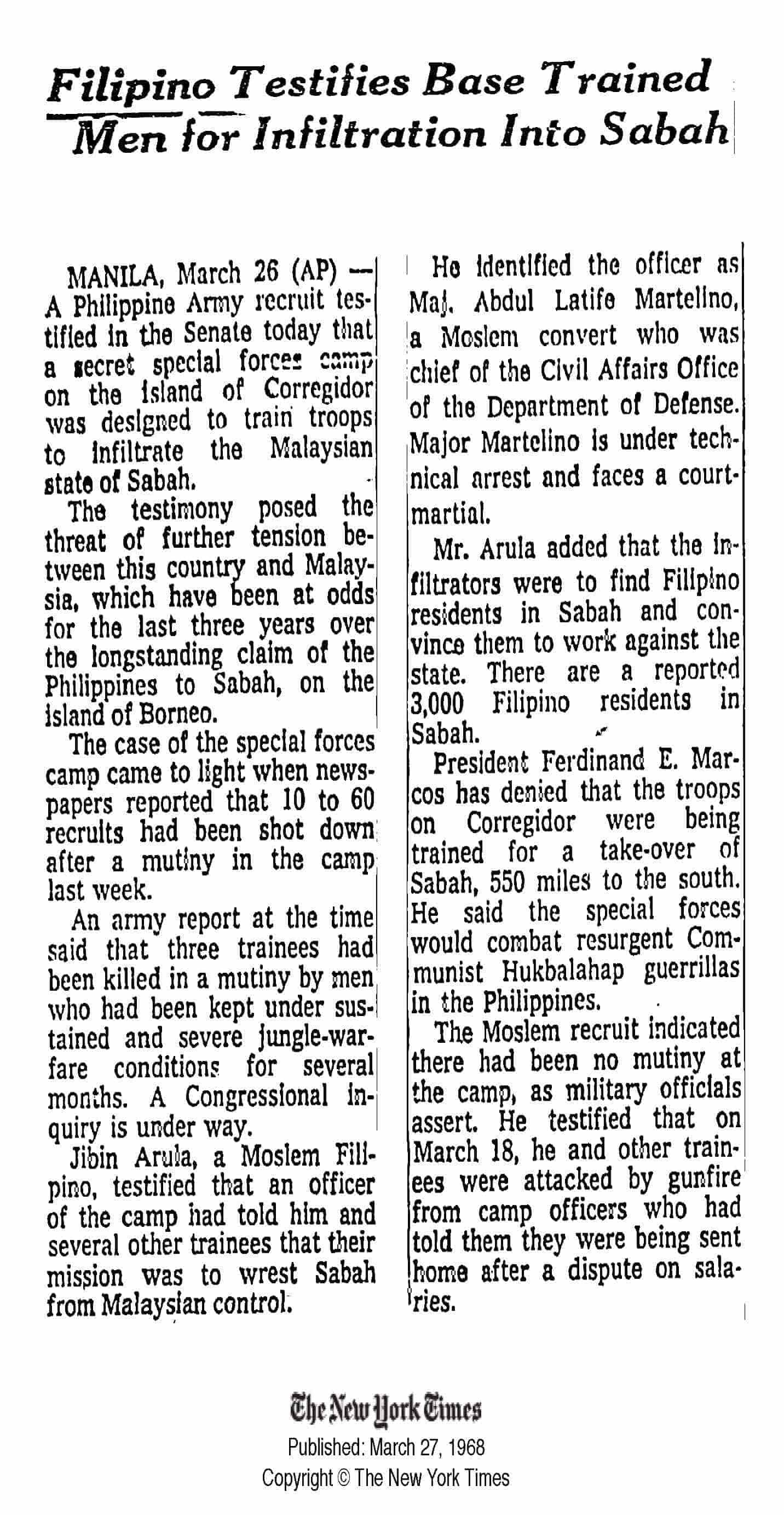 Arula, who died in a vehicular accident in 2010, later did a 4-part question-and-answer with MindaNews in March 2009 detailing his memory of the massacre.

On March 19, 2015, the Mindanao Garden of Peace in Corregidor was unveiled to commemorate the 47th anniversary of the massacre. The shrine is sanctioned by the National Historical Commission of the Philippines.

Rappler has contacted the Department of Foreign Affairs to request a statement from Locsin regarding the false claim, but the agency has yet to reply.

Rappler also contacted DWIZ to request for a copy of the March 19, 2013 episode which, online posts claimed, was the episode where Locsin supposedly made the claim about falsifying the report about Jabidah. The radio station said they cannot find a copy of the episode in their library. – Miguel Imperial/Rappler.com