Dec 15, 2018 7:25 PM PHT
Rappler.com
Facebook Twitter Copy URL
Copied
A Facebook user supplies an unsubstantiated caption for some pictures of the ex-Bureau of Corrections chief and 2019 senatorial aspirant who went to the United States 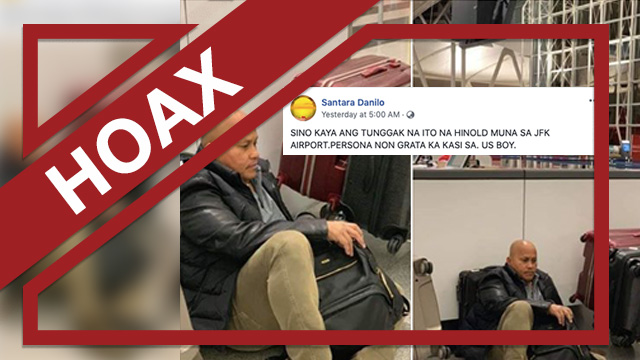 Claim: Former Bureau of Corrections director general and ex-Philippine National Police chief Ronald “Bato” dela Rosa was supposedly held at an airport in the United States because he was “persona non grata” (an unwelcome person) in that country.

Facebook user Santara Danilo on Friday, December 14, posted photos of Dela Rosa sitting in an airport floor, with a caption in all caps: “Sino kaya ang tunggak na ito na hinold muna sa JFK airport[?] Persona non grata ka kasi sa US boy.” (Who is this fool held at the John F. Kennedy airport? You are a persona non grata in the US, boy, that’s why.)

A reader submitted this claim to Rappler for verification.

The facts: Dela Rosa was not held at a US airport. He was also not declared a persona non grata by the United States.

Dela Rosa indeed went to the US and posted the photos on his Facebook account on December 7. It carries the caption, apparently in jest: “Homeless @ JFK airport, NY. Laag pa more! (Go ahead, travel more!)” 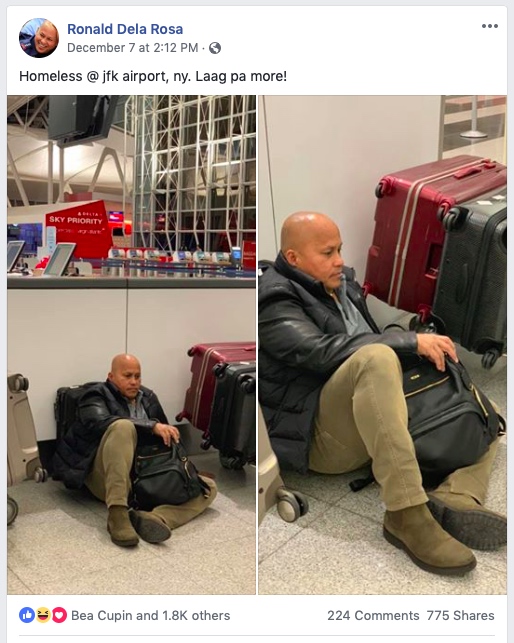 There are no reports from credible news organizations to support the Facebook user’s claims.

Dela Rosa is running for senator in the 2019 midterm elections. – Michael Bueza with Rambo Talabong/Rappler.com