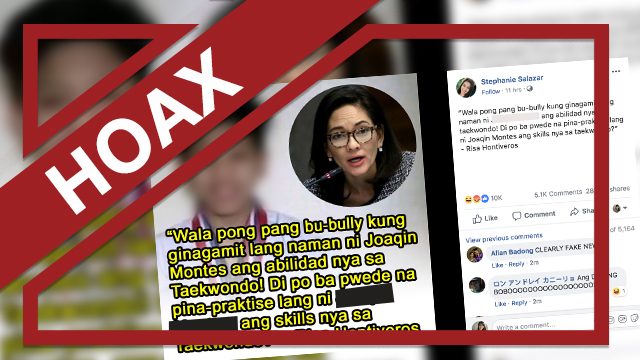 Claim: Two Facebook posts by the user Stephanie Salazar, claimed that Senator Risa Hontiveros said the Ateneo student who was caught being violent to his classmate was not bullying, but was merely “practicing taekwondo.”

The first post, published early Friday, December 21, attributed the following quote to Hontiveros and even included a photo of the child with a photo of the senator:

The second post, published around an hour-and-a-half after the first, claimed that Hontiveros said the following:

The posts have more than 36,000 shares between them as of posting.

Facts: Hontiveros did not issue an official statement or give any interviews about the Ateneo bullying incident when the Facebook posts were uploaded. This was confirmed to Rappler by her team via text.

She said: “Kahit Pasko ay hindi palalampasin ng mga fake newsmakers na ito. May hinahabol na quota? (These fake newsmakers will not let go, even during Christmas. Are they trying to reach a quota?)

“‪Bullying is a SERIOUS and SENSITIVE issue that should never be condoned. I hope this shouldn’t distract us from doing what is right: ending the vicious cycle of violence.‬”

After videos of an Ateneo Junior High School (AJHS) student bullying other students went viral on December 19, AJHS principal Jose Antonio Salvador said in a memo that the school is investigating the incident.

Ateneo de Manila University president Fr Jose Ramon Villarin SJ said in a separate statement that the school is “treating the matter with the highest priority and urgency.”

He also said: “Let me be very clear: the school does not condone such behavior. We have our codified standards of conduct and all students are made aware of these and their rights and responsibilities.” – Vernise L. Tantuco/Rappler.com

*Name removed to protect the identity of a minor.