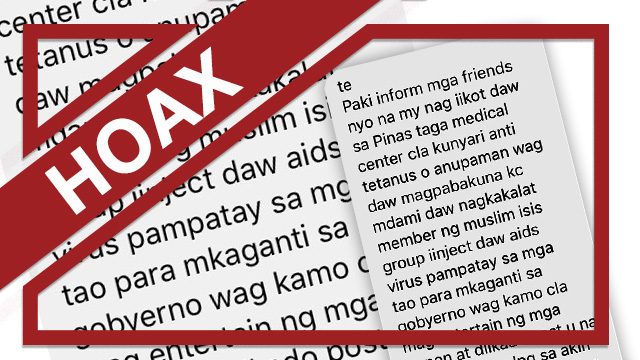 The message claimed that there might be members of the Islamic State (ISIS) group pretending to administer vaccinations at health centers, but are actually spreading the AIDS virus instead. They were supposedly doing this to retaliate against the government.

The message advised readers not to let themselves be vaccinated lest they be victims of this scam.

(Please inform your friends that there are people in the Philippines who are pretending to be members of medical centers and are pretending to give out anti-tetanus [shots] or something similar. Don’t let yourself be vaccinated because there are many members the Muslim ISIS [Islamic State] group who will inject the AIDS virus to kill people in order to retaliate against the government. Don’t entertain those, they’re dangerous. This was just passed on to me, it might be true, so it’s better that you know and be careful. Please pass this on to as many as you can.)

Facts: The Department of Health (DOH) denied that there were any official reports about ISIS members moving within their health centers to spread AIDS.

The agency told Rappler in a text message: “We don’t have any report of such activities. This kind of rumor does nothing but erode public trust in vaccines.”

In a previous interview with Rappler, Health Undersecretary Enrique Domingo said the department was still recovering from the Dengvaxia dengue vaccine scare that erupted in November 2017.

At the time, pharmaceutical company Sanofi announced that Dengvaxia was effective for individuals who had been previously infected with the dengue virus, but posed more risks to those who had never been infected before. This news came after a school-based immunization program was launched in 2016. (READ: Dengvaxia sale approved for dengue-endemic areas in Europe)

Domingo said that many parents were still wary of any kind of intervention from the DOH, be it an injection or a pill. As a result, parents did not want their children to even be dewormed, and participants of certain studies begged off. – Vernise L. Tantuco/Rappler.com