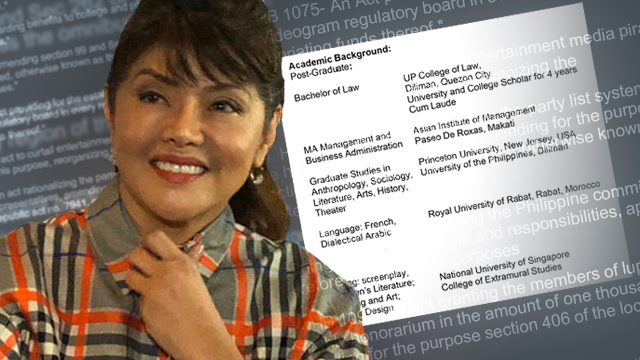 Facebook Twitter Copy URL
Copied
(UPDATED) 'There is no record of her graduation from UPD (University of the Philippines Diliman) nor any honors or academic distinctions received with the University Registrar's office,' says UP Executive Vice President Teodoro Herbosa

The same CV indicated that she has an MA in Management and Business Administration from the Asian Institute of Management (AIM), a degree that was never offered at AIM, according to the school’s registrar. While the degree was in her old CV, it no longer appears in the current one uploaded on her official website. The same is true of her UP Law degree.

Marcos was also referred to as “one of the honor graduates of the University of the Philippines” in an article in the Manila Bulletin dated May 1, 1983, the year of her supposed graduation. It was more than two years after the formal lifting of Martial Law in January 1981. It was earlier proven that Marcos did not obtain her degree at Princeton University despite claiming on her Facebook profile that she was one of the university’s first female graduates.

The Facts: UP Executive Vice President Teodoro Herbosa told Rappler in an e-mail that Marcos has no record of graduation nor honors with the UP Registrar’s office.

Herbosa said, however, that Marcos took non-degree courses or courses without credit both in the College of Arts and Sciences and the College of Law.

“The records kept by the University of the Philippines Diliman Registrar indicate that Ms Marcos took non-degree courses (courses without credit) in the College of Arts and Sciences University of the Philippines Diliman during academic year 1976-77. Thereafter she took courses under the Bachelor of Laws program at the UP College of Law from 1st semester 1979 to 2nd Semester 1983. There is no record of her graduation from UP [Diliman] nor any honors or academic distinctions received with the University Registrar’s office,” the e-mail read.

The question of whether or not Marcos obtained her UP law degree is not new.

In a September 2017 opinion piece for Cebu Daily News, columnist Madrileña de la Cerna, who was graduating from UP’s MA Asian Studies program the same year Marcos purportedly graduated from UP Law, wrote, “It was public knowledge during my stay in the campus that Imee could not graduate because she lacked 35 units.”

In the book Some Are Smarter Than Others published in 1991, writer Ricardo Manapat said, “Imee…never finished her degree at Princeton. She later enrolled at the College of Law at the University of the Philippines, but not without controversy.” Manapat wrote that UP students protested Marcos’ graduation, demanding that then-UP president Edgardo Angara furnish them with her academic records.

“It appeared that Imee never had the proper qualification to enter the school and that her name never appeared in the list of approved graduates nor among the candidates endorsed for graduation by a committee,” he also said in the book. – with reports from Jodesz Gavilan/Rappler.com