Apr 25, 2019 11:31 PM PHT
Rappler.com
Facebook Twitter Copy URL
Copied
The value of gold allegedly stolen and shipped is more than the value of the total gold reserves in the country 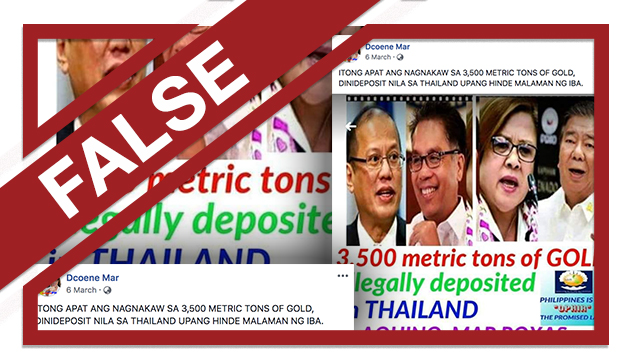 Claim: Former Philippine president Benigno Aquino III and some members of his Cabinet allegedly stole 3,500 metric tons of gold worth $141 billion, and illegally deposited it in Thailand in 2014.

Facebook user Dcoene Mar publicly posted on March 6 a meme which said plunder and graft complaints were filed before the Ombudsman against these 7 public officials. The original post was made by Facebook page Bonafide Ledfians way back February 27, 2018.

According to the post, the 7 public officials orchestrated the illegal shipment to Thailand in December 2014.

The facts: A complaint against the mentioned public officials for the alleged gold shipment to Thailand was indeed made before the Ombudsman by a certain Rogelio Cantoria and Fernando Perito in January 2017, but the document they filed had already been debunked and deemed questionable by several news agencies including Rappler, ABS-CBN, GMA News, BusinessWorld, and Manila Bulletin.

The reports pointed out that the complainants based the case on a nonexistent BSP circular and cited wrong information, including the titles of the accused, dates, Republic Acts, and signatories.

Moreover, the claimed size and value of the alleged stolen gold are way too large compared to the total gold reserves of the country.

Official data from the BSP and the World Gold Council (WGC), a nonprofit association of the world’s leading gold producers based in the United Kingdom, show that the gold reserves of the Philippines hasn’t reached the levels stated by the claim.

Since 2000, the earliest available data from the WGC, the gold reserves in the Philippines has only reached a highest level of 274.4 tons in the first quarter of 2003. This makes up just a mere 7.84% of the allegedly stolen 3,500 metric tons.

Total gold in the country even increased after the alleged shipment in December 2014, albeit very minimally. The Philippines had 194.9 tons of gold in the third quarter of 2014. In the first quarter of 2015, it jumped to 195.3 tons.

The purported value of the shipped gold is also way off the official gold reserves value reported by the BSP. Based on data from the central bank, the highest value of gold recorded in the Philippines since 2000 was $10.4 billion in 2012. This is just 7.34% of the alleged stolen value of $141 billion.

There was also a claim that the gold bars shipped to Thailand were part of the Marcoses’ ill-gotten wealth, which may explain why the figures don’t match the official data from the central bank. But that has also been previously debunked. (Read: HOAX: Marcos gold bars, jewelry ‘taken by Aquinos,’ opposition) – Rappler.com