MISLEADING: ‘Cheating’ during start of overseas voting in UK, Italy

Apr 27, 2019 3:40 PM PHT
Rappler.com
Facebook Twitter Copy URL
Copied
Some overseas Filipino voters in the United Kingdom and Italy air their concerns about the mode of voting at the Philippine embassies there 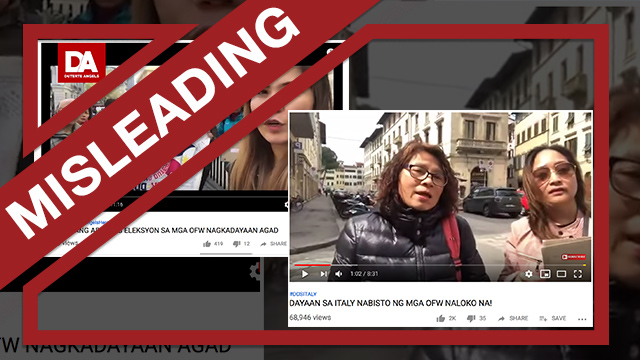 CLAIM: Cheating took place on the first day of overseas absentee voting in the United Kingdom and Italy.

On Wednesday, April 15, two days after the start of overseas absentee voting, the Youtube channel Duterte Angels posted a video titled “VIRAL: UNANG ARAW NG ELEKSYON SA MGA OFW (OVERSEAS FILIPINO WORKERS) NAGKADAYAAN AGAD (VIRAL: CHEATING ON FIRST DAY OF OFW VOTING).” The video has since been deleted but had over 20,000 views before it was taken down.

A similar video cropped up with a title claiming that there has been cheating in Italy. A video titled “DAYAAN SA ITALY NABISTO NG MGA OFW NALOKO NA! (Cheating discovered in overseas voting in Italy)” was posted by Youtube channel Junriel Llander on Monday, April 15, airing the same concerns and calling for the system of voting to be changed. It has over 68,000 views as of posting.

The Facts: The videos are of OFWs airing their concerns about the system of overseas voting.

While the concerns regarding the overseas absentee voting process raised seemed legitimate, the videos showed no direct evidence of cheating done by Commission on Elections (Comelec) officials at the Philippine embassy in the United Kingdom or in Italy, contrary to what the videos’ titles claim.

Rather they showed OFWs sharing their concerns and criticisms about Comelec’s system.

Two others shared a similar gripe, asking how they could make sure that their ballots are fed into the VCMs.

Meanwhile, two OFWs from Florence also complained about how they wouldn’t be the ones feeding their ballots into the VCMs. This, they said, could potentially lead to cheating.

The mode of voting observed at both the Philippine embassy in London and the embassy in Rome is postal, automated election system (AES) of voting. This means that voters will mail their ballots to respective voting posts and Comelec-designated officials will feed their ballots into VCMs. (READ: What you need to know if you’re an overseas absentee voter)

Voting period for overseas voters will run from Saturday, April 13, to Monday, May 13. – Rappler.com