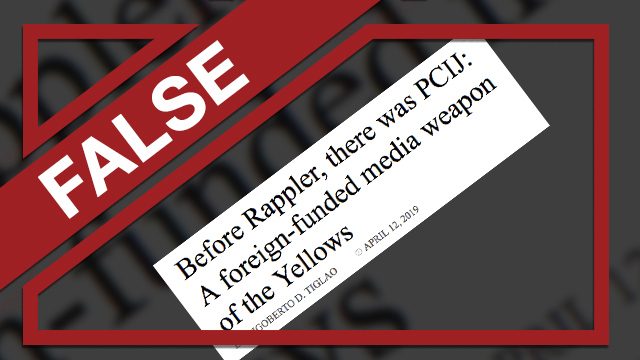 In his column titled “Before Rappler, there was PCIJ: A foreign-funded media weapon of the Yellows,” Tiglao alleged that the PCIJ website published “scores of articles vehemently critical of [former president Gloria Macapagal Arroyo]” but did not publish even a “single” article criticizing Aquino or Ramos.

Accompanying Tiglao’s article is a table supposedly comparing the number of articles published against Arroyo and now-President Rodrigo Duterte versus articles against Aquino. In the column for Aquino, no articles were listed. 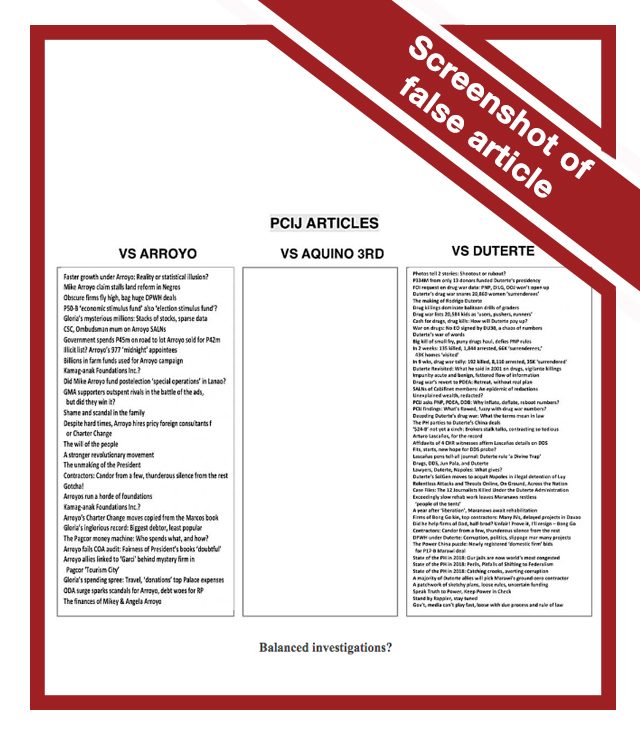 In calling out the PCIJ for supposedly not being balanced with its reporting, Tiglao further said a PCIJ article titled “The Wealth of P-Noy” which was published in July 2011 was meant to “preempt criticism” over its report on Aquino’s wealth.

Tiglao implied that the PCIJ cleared Aquino of any corruption allegations as they only pointed out the increase as an inheritance from the late former president Corazon Aquino.

Besides Aquino, Tiglao said, “there is no PCIJ article critical of the second Yellow regime of Fidel Ramos posted in its website.”

Blog site world-news-crawler.blogspot.com echoed Tiglao’s article. This blog, in turn, has become the source of Facebook pages Duterte Speaks Now and Thinking Minds to share the claim on Facebook.

The Facebook posts have gotten almost 500 shares and 400 reactions.

The facts: A quick examination of the PCIJ website shows that, contrary to Tiglao’s claim, a number of investigative articles were published in relation to the Aquino and Ramos administrations.

For instance, at the start of the Aquino administration, the PCIJ wrote a 3-part series on Aquino’s excess campaign funds. The series included a sidebar entitled “The wealth of P-Noy,” which compared Aquino’s declared wealth as of December 2009 with his assets as of December 2010. The sidebar raised questions over the threefold increase in Aquino’s wealth – from P15 million to P55 million – since he assumed the presidency.

When the controversy over the Priority Development Assistance Fund (PDAF) broke two years into the Aquino presidency, the PCIJ also released a 5-part series entitled “Pigging out on Pork a la PNoy.”

The PCIJ also reported about media killings during Aquino’s time as well as the previous administration’s inefficiency in handling funds intended for those affected by Super Typhoon Yolanda (Haiyan). In January 2015, the PCIJ published the article “Aquino gov’t & Yolanda: A lot of money, impact too little too late” along with related articles.

Ramos, on the other hand, was investigated by the PCIJ in 1998 in relation to the anomalous PEA-Amari transaction. The story on this, entitled “The grandmother of all scams,” even won a Jaime V. Ongpin Award for Excellence in Journalism, an award given to investigative stories for exposing compelling stories supported with solid evidence and well-grounded research and probes.

It is also worth noting that Tiglao did not just list down investigative reports in his table. The tables listed individual story titles. If this is considered, the 5-part series on PDAF alone is already 5 titles, while the 3-part series on campaign funds would be 3 titles.

These are just some examples. The list goes on.

This is not the first misleading or false claim against media organizations that Rappler has fact-checked. Among those previously fact-checked were fabricated news headlines and a false claim that media organizations PCIJ, Vera Files, and Rappler are involved in an ouster plot against Duterte. – Glenda Marie Castro and Gemma B. Mendoza/Rappler.com