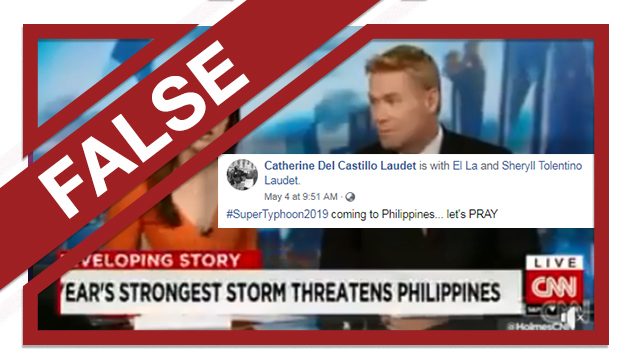 Claim: Facebook user Catherine Del Castillo Laudet claimed in a post on May 4 that a super typhoon is about to hit the Philippines. 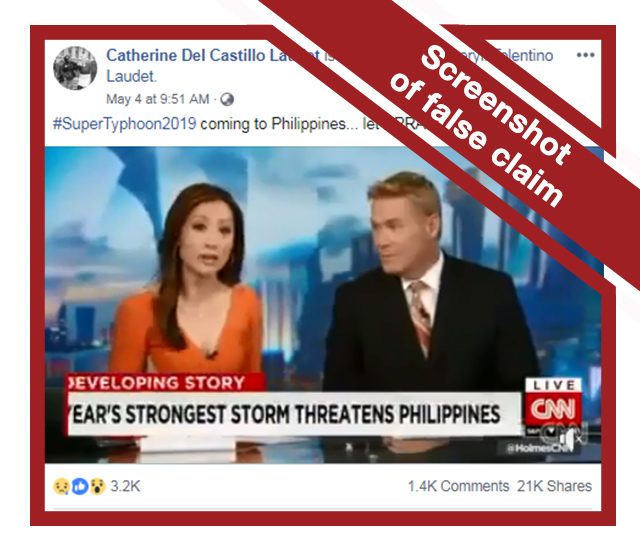 Laudet’s post has been spotted via Facebook Claim Check, one of Rappler’s channels for fact checking. As of this writing, the post has garnered around 3,400 reactions, 1,300 comments, and 23,000 shares.

The facts: The video in the Facebook post is CNN’s 2014 report about Typhoon Ruby, which struck the Philippines in December 2014.

Laudet’s claim is a rehash of false Facebook posts in 2018 that also used the same video from CNN.

Pag-asa clarified that as of Tuesday, May 7, no super typhoon is headed to the Philippines. The weather agency, as of this writing, has only just been monitoring two low-pressure areas (LPA) inside and outside Philippine Area of Responsibility (PAR).

(There’s no truth that there will be a super typhoon anytime. Fow now [we’ve been] monitoring LPA, one inside PAR, on the west of Ilocos Sur, one outside PAR, on eastern Mindanao.)

In the CNN report, meteorologist Tom Sater was discussing with anchors the characteristics of Typhoon Ruby along with comparisons to Super Typhoon Yolanda. The two were compared as Typhoon Ruby was considered the Philippines’s strongest typhoon in 2014, which came a year after Yolanda.

Facebook user Catherine Del Castillo Laudet, meanwhile, describes herself as one who works in a chemical and pharmaceutical company. Her recent posts, aside from the false claim about a super typhoon, have been flagged by some Facebook users as fake. – Addie Pobre/ Rappler.com