Facebook Twitter Copy URL
Copied
(UPDATED) The claim is rehashed. It has been proven that the woman in the photo is not Abigail Valte, but Jo Christine Napoles, the daughter of alleged pork barrel scam mastermind Janet Lim Napoles.

(Former Noynoy Aquino [spokesperson] Abi Valte, maybe you are too stressed out to pick on [senator-elect Ronald ‘Bato’ dela Rosa]. Maybe, just have a Hong Kong Celine store closed again and do some retail therapy there, just like what you did at the height of the P10-billion Napoles Scam scandal.)

The photo shows two female customers who appear to be assisted by two female store assistants. 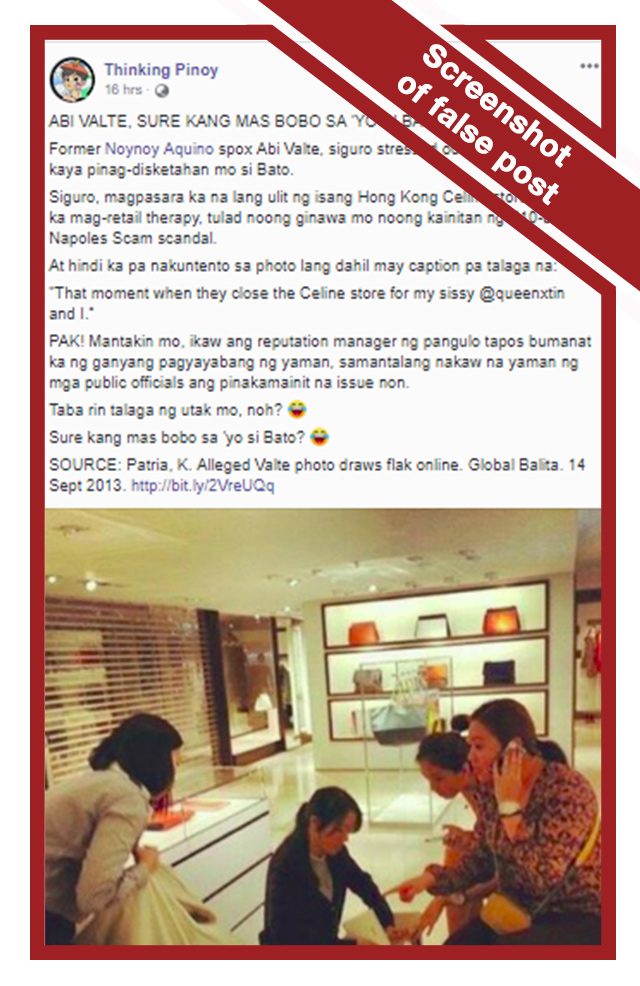 In a separate post on the same day, Thinking Pinoy posted a meme comparing Valte to senator-elect Dela Rosa.

The text describing Valte said that she had a retail shop in Hong Kong closed before she went shopping. Under the photo of Dela Rosa, the text read: “Pinasara ang drug dens bago mag-senador.” (Closed drug dens before being elected as a senator.) The facts: The woman in the photo is not Valte, but Jo Christine Napoles*, the daughter of the accused mastermind of the pork barrel scam Janet Lim Napoles.

The claim is also rehashed. Valte told Rappler that the man who falsely accused her of being in the photo was social media user Philip Nazareno who posted the claim on Facebook page event Million People March in 2013. Nazareno has apologized to her.

According to a Yahoo News article published in 2013, the photo was posted on Instagram by user “@awakenedtiger” with a caption that said, “That moment when they close the Celine store for my sissy @queenxtin and I.”

The Philippine Canadian Inquirer posted an article verifying that the username @awakenedtiger is the Instagram account of Jeane Napoles, but it was no longer active.

Valte first denied the claim through her tweet in September 2013.

She reiterated the same statement in her Facebook account in May 2019 and even posted a magnified version of the woman in the photo comparing it to the mugshot of Jo Napoles.

*Editor’s Note: A previous version of this story mistakenly indicated “Jeane Napoles” as being in the photo when it should have been Jo Christine Napoles.