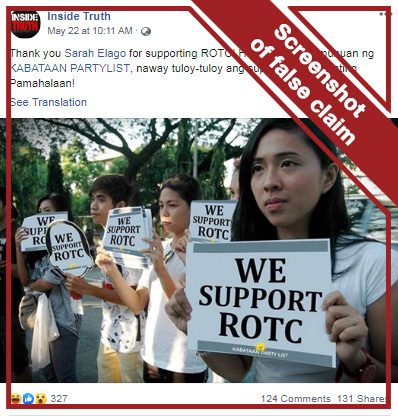 As of writing, the photo has gotten 327 reactions, 124 comments, and 131 shares. Rappler spotted the claim via Facebook Claim Check, Facebook’s fact-check tool that collates potential hoaxes for fact checkers’ review.

The facts: A quick reverse image search showed that the photo is a manipulated version of Pinoyweekly’s 2015 photo showing Elago and other members of Kabataan holding placards to oppose the Education Act of 1982 and tuition hikes.

In the actual photo, Elago was protesting with other members of the National Union of Students of the Philippines, which is among the founding organizations of Kabataan. As archived in Wayback Machine, the original photo was taken by Darius Galang for an article in Pinoyweekly about youth activists criticizing the Commission on Higher Education’s approval of the applications of private universities for tuition hikes.

Reacting to the manipulated photo, Galang and Kabataan released a statement on Facebook on Friday, May 24.

“First, I took this photo. Second, it is not the message…. These trolls and fake news makers are deplorable,” Galang said.

Kabataan, aside from denouncing the false photo, also reiterated its position against mandatory ROTC.

“The current call to revive mandatory ROTC will not only multiply abuses and corruption cases [in] the secondary and tertiary levels; it will [also] breed Duterte’s brand of unthinking obedience,” said the group.

On May 20, the House of Representatives approved on 3rd and final reading the controversial bill making ROTC mandatory for Grades 11 and 12.

House Bill No. 8961, if passed into law, would make ROTC mandatory for both males and females in senior high school. The Senate version of the bill, Senate Bill No. 2232, remains pending at the committee level.

The Facebook page Inside Truth was created in July 2015. It has around 14,000 likes as of writing. Majority of its posts express opposition against organizations supposedly connected to the Communist Party of the Philippines-New People’s Army, calling them “terrorists.” (READ: Bayan Muna, 3 other Left groups defy red-tagging, keep House seats) – Addie Pobre/Rappler.com