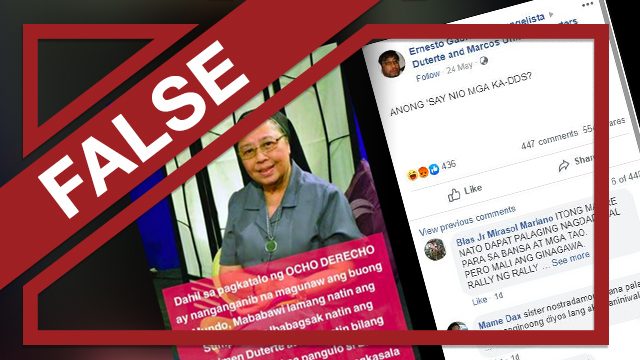 Facebook Twitter Copy URL
Copied
Sr Mary John Mananzan has been a staunch critic of the Duterte administration, but she hasn't called for the ouster of Duterte and his replacement by Robredo

Facebook user Ernesto Gabriel K. Evangelista posted on Facebook group “Duterte and Marcos Unite Supporters” on May 24 a photo of Mananzan, along with the following:

(The world’s end is near because of Otso Diretso’s loss. We can only break the curse if we overthrow the Duterte regime and appoint Leni Robredo as the new holy president, the woman who didn’t sin and who is the redeemer of the world.)

Mananzan’s name was at the bottom of the photo, suggesting that it was a direct quote from the nun.

As of writing, the post had 554 shares, 447 comments, and 436 reactions. The claim was submitted to Rappler for checking via email.

The facts: Sister Mary John Mananzan has been a staunch critic of the Duterte administration, but she denied calling for the ouster of Duterte.

“I would like to say that I never indulge in partisan politics. I never endorsed any individual candidate or a group of candidates. I never called for an ouster of Duterte although I have made and will continue to make critical remarks about his words and actuations,” she told Rappler via email. (READ: Breaking Glass: Feminist, activist nun)

Rappler has also reached out to Evangelista to ask for the source or basis of his post, but he has not responded to our message.

Mananzan is part of the Movement Against Tyranny (MAT), an alliance of groups and individuals that fights for human rights. Though the organization has called for Duterte’s resignation, she has cautioned in a speech during the first anniversary of MAT that the call for Duterte to step down should not be taken lightly.

“Our problems will not end with his resignation, if he has even the guts or delicadeza to do it,” she said in her speech delivered in August 2018.

Mananzan also didn’t advocate for Robredo as an immediate replacement to Duterte – or any other substitute for that matter – as the Facebook post suggests. She reasoned in the same speech that it would take not only an acceptable successor, but also the people’s high level of engagement to make sure the mistakes of the past are not repeated.

There is another video circulating on social media where the activist nun was recorded as saying, “Kung wala na tayong aasahan sa gobyerno, sinong inaasahan? Tayo po mismo. (If we can’t rely on the government anymore, who do we depend on? It’s ourselves, the people.) Kaya po (So) let’s go and again, ibalik natin ang (let’s bring back the) magic of people power.”

The video was taken during the #MadayangHalalan mobilization on May 17 to protest the results of the 2019 midterm elections. However, there was no mention of Duterte, Robredo, or Otso Diretso. (WATCH: Sr Mary John Mananzan reacts to youth’s views on People Power)

“I never said those words. Pure invention, not even my style – far from it. Even my friends knew in an instant that they are not my words,” Mananzan said via email, referring to the Facebook post. – Pauline Macaraeg/Rappler.com