FALSE: Militant groups to ‘protest’ shut down of Kapa-Community Ministry 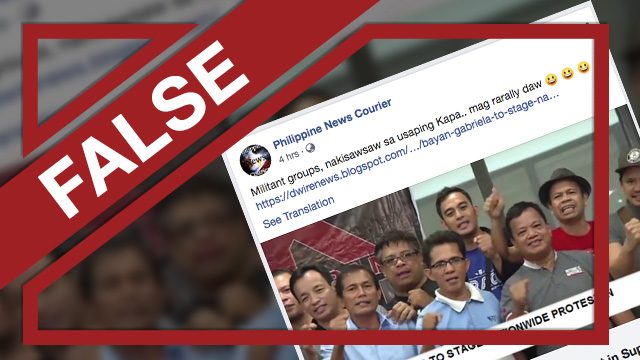 Claim: Militant groups Bagong Alyansang Makabayan (Bayan), Gabriela, Kadamay, and the Trade Union Congress of the Philippines (TUCP) supposedly planned to stage a rally to protest the shut down of the Kapa-Community Ministry.

The blog site dwirenews.blogspot.com published a post on June 11 claiming that a certain Edwin Latorgo, Bayan’s “chief protest organizer,” said that “the rally will be held nationwide and millions of Kapa members who are waiting for their money are expected to join.” This claim was spotted through Trendolizer, a tool used to track trending content on websites and social media. The two blog entries were shared separately by at least 3 Facebook pages and have gained over 1,000 combined interactions as of writing.

The facts: None of the groups and individuals mentioned in these posts made any public statements about Kapa or made announcements regarding the alleged protests against its shutdown.

Speaking to Rappler, Bayan’s Reyes denied the claim and said, “We have not issued such statement nor conducted any action supporting Kapa. This is obviously fake and part of the disinformation campaign of the Duterte government.”

Reyes also said the claim was probably released to “draw attention away from the June 12 protests concerning national sovereignty.”

Google search also yielded no results for Latorgo and his statement about the protest.

Gabriela also denied the claim and said that they are not familiar with Kapa and are not affiliated with them.

In a text message to Rappler, the party list’s representative Arlene Brosas said, “No, wala po na ganyang plano.” (There is no such plan.)

Rappler also checked the Facebook pages of these groups and found no posts relating to Kapa.