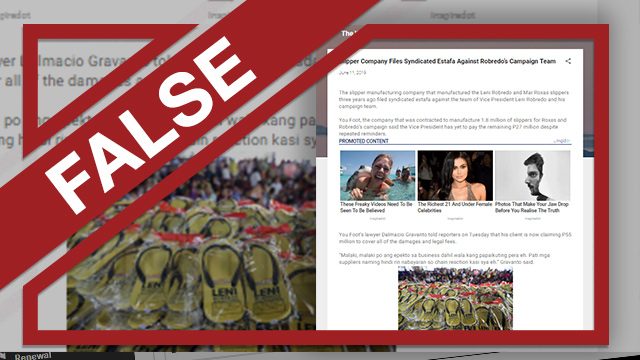 Facebook Twitter Copy URL
Copied
The alleged slipper company 'You Foot' is non-existent. The Department of Trade and Industry and Securities and Exchange Commission do not have a record of the company.

Claim: The “slipper company” that manufactured campaign slippers for Vice President Leni Robredo and then-presidential candidate Mar Roxas for the 2016 elections filed a case of syndicated estafa against Robredo and her campaign team.

The website dwirenews.blogspot.com published an article on June 11 claiming that Robredo has yet to pay P27 million of her P64.8-million contract with “You Foot,” the slipper company that was supposedly hired to manufacture P1.8 million campaign slippers for Robredo and Roxas. 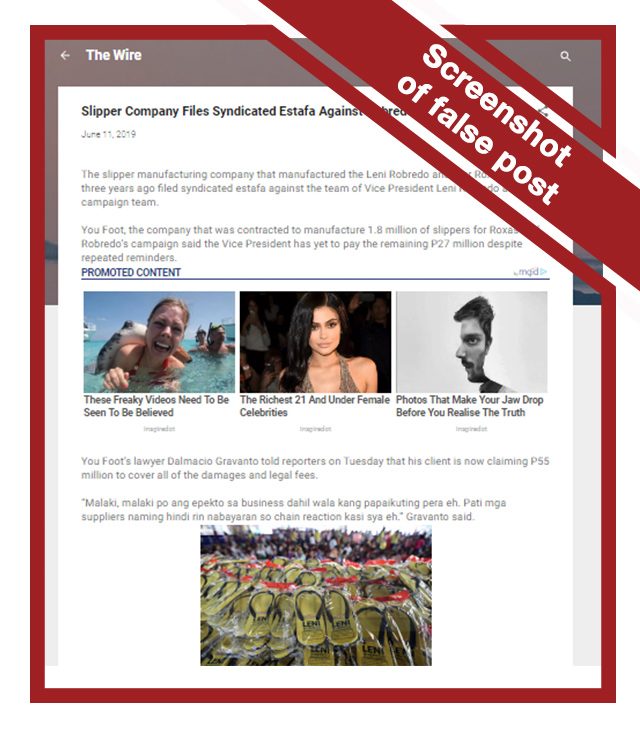 The supposed estafa case was allegedly filed before a “Manila City court” and named Robredo and 6 other staff who worked for her 2016 campaign as respondents.

Facebook page OKd2 shared the article and garnered 125 reactions, 12 comments, and 63 shares as of writing. Rappler spotted the article through Trendolizer, a tool that tracks trending content on websites and social media.

The facts: The alleged slipper company “You Foot” is non-existent. The Department of Trade and Industry (DTI) and Securities and Exchange Commission (SEC) do not have a record of the company.

No records were found about the company in DTI’s web portal where records of registered business can be searched.

SEC’s web portal also did not show any record of a company registered under the name “You Foot.”

The Supreme Court’s database of lawyers also did not show a record of Dalmacio Gravanto.

Barry Gutierrez, Spokesperson of Robredo, testified the article from The Wire is “completely untrue” and that “there was no such transaction.”

The page Okd2 describes itself as a “Filipino classified ads websites.” It was created on October 13, 2016 and currently has around 9,000 likes. – Addie Pobre/Rappler.com