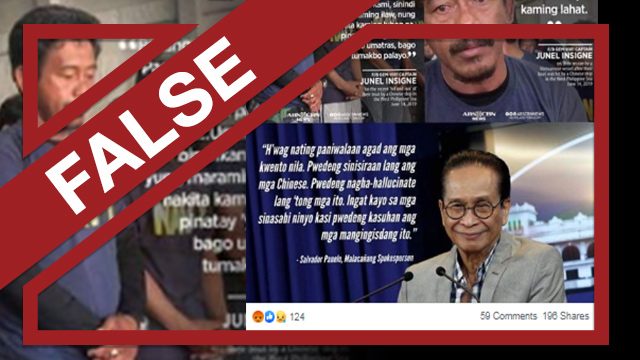 Facebook Twitter Copy URL
Copied
Panelo does not say that in any of his press briefings and interviews after the sinking incident. However, after President Duterte downplays what happened as a 'maritime incident,' Panelo shifts gears.

Claim: A Facebook meme of Presidential Spokesperson Salvador Panelo claimed that the Filipino fishermen involved in the boat sinking incident in the West Philippine Sea were only hallucinating.

(Let’s not believe their stories right away. It’s possible the Chinese are only being discredited. They might only be hallucinating. Be careful of what you say, because these fishermen could be sued.) 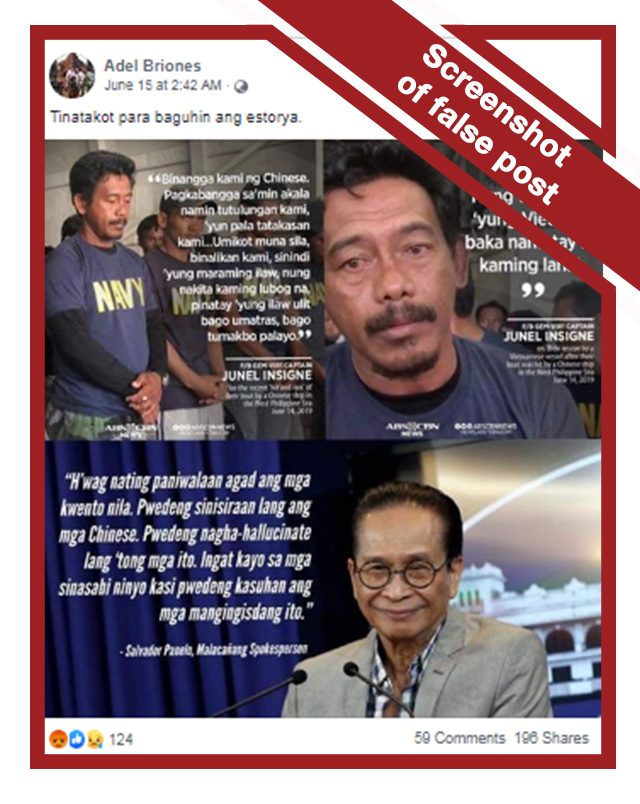 Facebook page “Page Index” on June 15 and Facebook users such as Adel Briones and Jaizy Jakosalem on June 15 and 16, respectively, shared the meme of Panelo. Their posts have garnered a combined 445 reactions, 383 comments, and 2,133 shares, as of writing.

A reader e-mailed the supposed statement to Rappler for verification.

The facts: Panelo has not issued such a statement in his press briefings and interviews since the sinking incident on June 9.

Panelo maintained in his press briefings and interviews on June 13, 14, and 17 that the Philippine government denounced the Chinese vessel’s abandonment of the Filipino crew after the sinking.

However, he was also careful to establish that other details of the incident are still subject to investigation.

“Anyway, I said, that act of abandoning our Filipino crew after sinking that vessel, whether by accident or not, is uncivilized, outrageous; even barbaric. That’s against international protocol of lending a hand to ship in distress, absolute distress. Mali iyon (that’s wrong) by whatever angle you look at,” Panelo said in a DWFM radio interview on June 13.

“Kagaya ng sinabi ko, you have to investigate first. Like for instance, kung may binangga rin iyong ating … isang Filipino ship, eh kung private naman iyon, ano bang kinalaman din natin doon, ‘di ba? But we will also investigate, do something. Tingnan muna natin. But definitely, we are denouncing it already. That fact alone should initiate some actions on the part of the Chinese government,” Panelo said.

(Like what I said, you have to investigate first. Like for instance, whether our own… Filipino ship also sank another, but if it’s private, what have we got to do with it, right? But we will also investigate, do something. Let’s see first. But definitely, we are denouncing it already. That fact alone should initiate some actions on the part of the Chinese government.)

Panelo, in response to the false statement, dismissed it as a “hoax” and claimed that it put him and the Office of the President in a bad light.

“I strongly dismiss the attached social media card, where I have been purportedly quoted, as hoax. This meme puts me, as well as the Office of the President, in a bad light as we are placed in a position which suggests that we are siding with the Chinese anent the incident of allision in the West Philippine Sea,” Panelo said in an official statement released to the press on June 17.

However, after President Rodrigo Duterte dismissed the sinking as a “maritime incident,” Panelo shifted gears.

In a press briefing on June 18, Panelo maintained the Philippines cannot summon Chinese Ambassador Zhao Jianhua over the sinking boat incident supposedly because it has “no jurisdiction” over the envoy.

The Facebook meme of Panelo may be an allusion to Panelo’s statement in March 2019 against Jude Sabio, the lawyer who sued President Rodrigo Duterte last year before the International Criminal Court. Panelo said that the lawyer was only “hallucinating and publicizing” himself.

Facebook page “Page Index” claims to be a society and culture website. It usually posts memes about Philippine politicians.

Facebook user Adel Briones, meanwhile, supports the Filipino fishermen involved in the boat sinking. Jaizy Jakosalem is vocal on Facebook against the Duterte administration and his supporters.