FALSE: Drug overdose is leading cause of death in Iceland – Jay Sonza 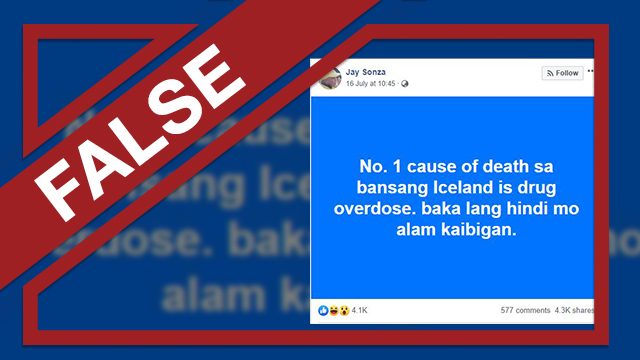 Claim: Former television newscaster and talk show host Jay Sonza said that drug overdose is the leading cause of death in Iceland.

“No. 1 cause of death sa bansang (in the country of) Iceland is drug overdose. Baka lang hindi mo alam kaibigan (In case you don’t know, my friend),” Sonza posted on his Facebook account on July 16, 2019.

The facts: Data from the National Statistical Institute of Iceland and the World Health Organization (WHO) show that “diseases of the circulatory system” – not drug overdose – are the leading cause of death in Iceland.

Statistics Iceland, the center for the official statistics in the country maintained by the National Statistical Institute of Iceland, said in December 2018 that diseases of the circulatory system and neoplasms were the main causes of death in the last 20 years. These diseases take up 33.8% (circulatory system) and 28.9% (neoplasms) of the total causes of death in the country.

Neoplasms, which include deaths caused by malignant neoplasms, in situ neoplasms, benign neoplasms, and neoplasms of unknown behavior, rank second.

Meanwhile, “mental and behavioral disorders,” which cover deaths due to substance abuse, only rank 13th based on latest available data from WHO. This category covers a broad type of complications including disorders due to use of alcohol, opioids, cannabinoids, sedatives or hypnotics, cocaine, hallucinogens, tobacco, and volatile solvents.

President Rodrigo Duterte reacted to this, saying the Nordic island nation does not understand the situation in the Philippines, and that the Icelanders “only eat ice.” But there’s more to Iceland than ice. – Pauline Macaraeg/Rappler.com