Aug 15, 2019 5:26 PM PHT
Rappler.com
Facebook Twitter Copy URL
Copied
The national debt is a 'running total' of how much a country owes and is not attributable to a single administration 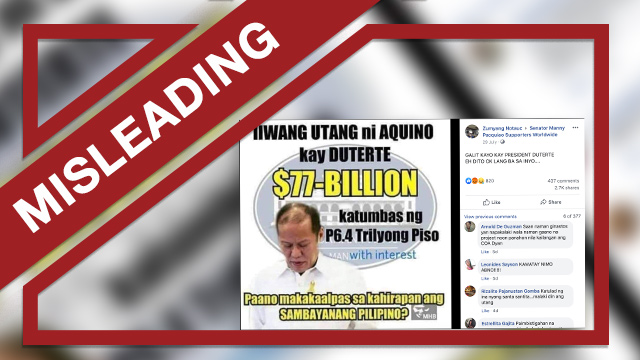 Rappler spotted the claim via CrowdTangle, which was shared by user Leticia Marquez on Facebook group Tulfo Brothers Worldwide on July 31, 2019. The post carried a photo of Aquino with his head bowed down and with the Malacañang seal behind him.

As of writing, the combined Facebook engagement of these posts had reached over 3,655 shares, 1,200 reactions, and 603 comments.

The facts: When Aquino left office in June 2016, the country’s national debt amounted to P5.9 trillion (P6.511 trillion with guaranteed debt) based on data from the Bureau of Treasury. But not all of these loans were incurred under the Aquino administration as the Facebook post suggests.

In a similar fact check article, economist JC Punongbayan explained that a government’s outstanding debt is a “running total” of how much the country still owes since new debt is incurred as old debt gets paid at any point in time. (READ: FALSE: Pie chart of Philippines’ national debt under 3 presidents)

The best way to determine the total debt an administration incurred is to compute the net addition to the outstanding amount during its term, since the government also makes regular debt payments.

In this case, the net addition to the national debt under the Aquino administration only amounted to P1.37 trillion in 6 years, since the outstanding debt stood at P4.6 trillion when he first came into office in June 2010. (READ: MISLEADING: Filipinos each owe P62,000 in debt ‘because of PNoy’)

Treasury data also shows that from July 2010 to June 2016, the national government paid a total of P3.6 trillion in debt service. – Pauline Macaraeg/Rappler.com