(P50,000 bonus for all members of SSS and P20,000 for the studies of their children signed by the President! Watch here how to avail of it online.) 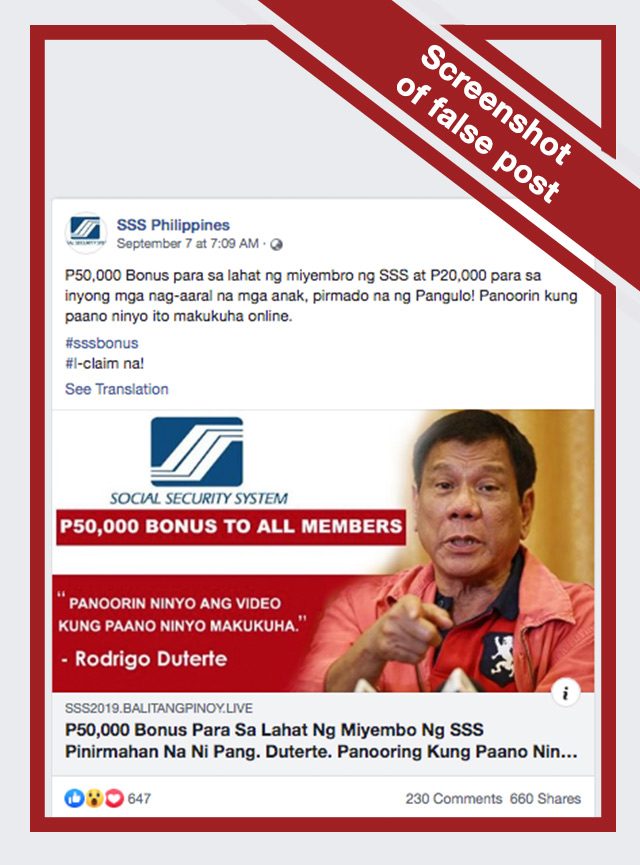 The source of the claim was the website sssphilippines.petpress.info, which also uses the logo of SSS. Another site unlibuzzmaniac.com also carried the same post.

Neither sites specified which law mandates the supposed benefit.

The claim was detected by Facebook Claim Check, a tool that monitors viral and potential false posts on Facebook.

It has been shared with Facebook 145 times accumulating combined reactions, comments, and shares of 7,724, as of writing.

Facts: Republic Act 11199 or Social Security Act of 2018, which was signed by Duterte in February 2019, has no provision granting members a P50,000 bonus. (READ: Duterte approves law overhauling SSS charter). Existing laws on the SSS grant members specific benefits but not bonuses as described in the claim.

The purpose of the new SSS law is to expand, protect, and increase the SSS fund to secure member pensions.

The official website of the SSS provides a summary table showing the benefits and qualifying conditions for its members. The information is as of June 2019. The alleged bonus is not in the published table of member benefits.

The official Facebook page of SSS also denounced the claim and warned the public not to be deceived by false information.

The two blog sites exhibited typical traits of many hoax sites that Rappler has fact checked in the past. Both embedded a 12-second video trimmed from Usapang SSS, a public service program aired on People’s Television Network (PTV-4). However, the video does not contain sufficient information about the said bonus. Typical of other clickbait content, a warning message displayed in the middle of the video says viewers must share it first before watching in full. – Glenda Marie Castro/Rappler.com