FALSE: Jovito Salonga ‘says Ninoy Aquino is not a hero’

Nov 29, 2019 6:35 PM PHT
Rappler.com
Facebook Twitter Copy URL
Copied
Salonga did not say these statements. The quote was an opinion lifted from a blog site and was falsely attributed to the late statesman. 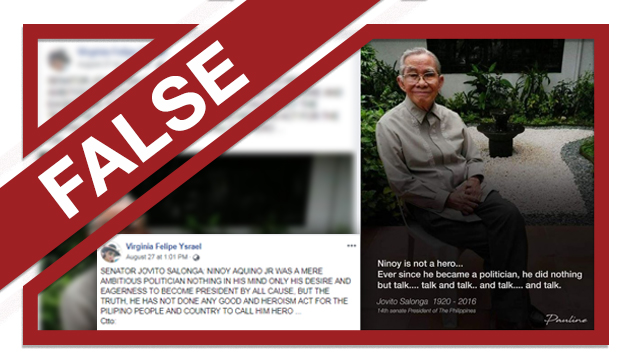 Claim: Former Senate President Jovito Salonga supposedly said that former senator Benigno “Ninoy” Aquino Jr was not a hero and was an ambitious politician who did nothing for the country but only talk.

The supposed quote is superimposed on the photo of the late senator. The caption for the post, which is also a quote attributed to Salonga, reads:

“Senator Jovito Salonga: Ninoy Aquino Jr. was a mere ambitious politician nothing in his mind only his desire and eagerness to become president by all cause, but the truth, he has not done any good and heroism act for the Filipino people and country to call him hero.” 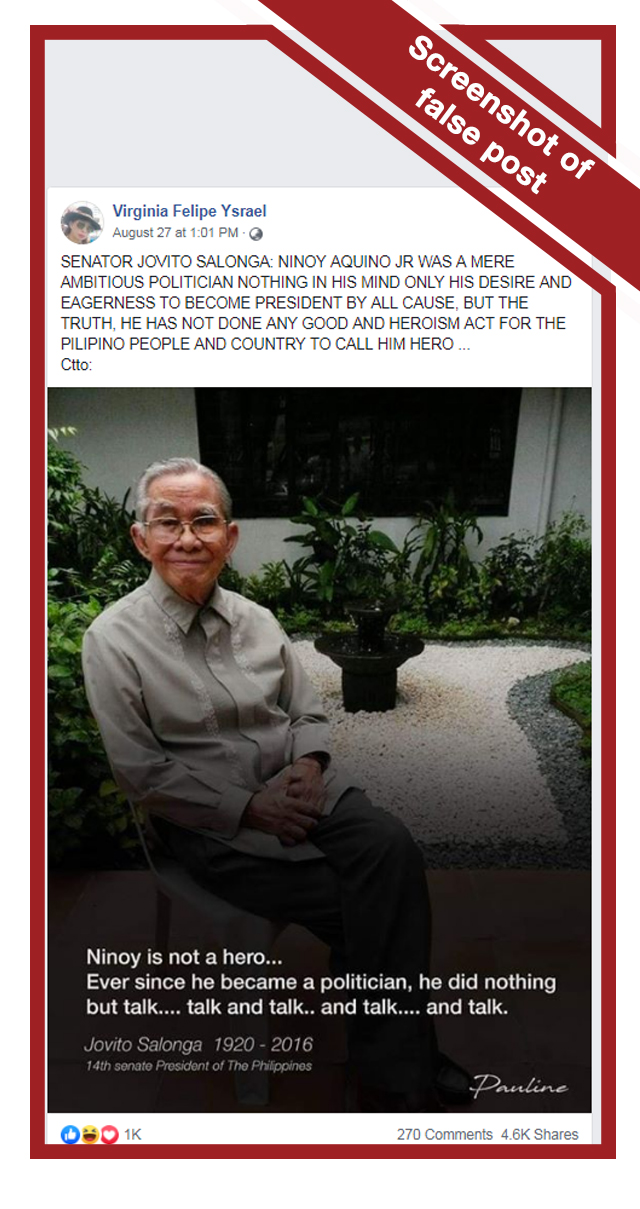 The claim had a total of 5,000 interactions on Facebook. The claim was sent to Rappler’s email for a fact check.

The facts: Salonga did not say these statements. The quote was an opinion lifted from a blog site and was falsely attributed to the late statesman.

The blog site ninoyistraitor.blogspot.com posted an entry dated August 2016 titled, “Ninoy is a traitor. Not a hero.”

In the latter part of the blog, the author cited Salonga, who supposedly said that only a small population of the country joined the EDSA revolution. And then he wrote, “Ninoy Aquino is not a hero, he died for his ambition. This man has not done anything for the country except to talk, blame and destroy the reputation of President Marcos.” He said this without attributing it to Salonga.

Rappler found that this blog content started to be copied and pasted by Facebook pages such as Pinoy Balita in November 2018. In 2019, multiple Facebook and Twitter users started sharing the edited image of Salonga with the supposed quote.

A Google image reverse search showed that the photo was used by the Official Gazette on March 10, 2016 for a memorial tribute to Salonga. The photo was credited to Steve Salonga, the late statesman’s son.

No official historical records or digitized archived content support the claim that these were Salonga’s words.

This was substantiated by Steve Salonga, who told Rappler through Facebook Messenger that “[it is] not true for several reasons.” He said, “[He] never spoke like that about anyone, even his rivals. He was very fond of Ninoy who he called bunso (youngest sibling). He defended Ninoy in various legal cases throughout their careers. A quick search through newspaper archives (circa 1965-71) would reveal all these facts.”

We also asked the Facebook users for the sources of their claim but they have not replied as of this writing. Some of them also deleted their posts after we messaged them.

Vera Files has also debunked the claim. In September 2019, a supposed letter to Cory Aquino with Salonga’s forged signature was also proven false.

Salonga was among the respected Filipino politicians who resisted Marcos’ Martial Law and was appointed chairman of the Presidential Commission on Good Government by Cory Aquino to go after the Marcos’ ill-gotten wealth. He became Senate president from 1987 to 1991.  (READ: Fast Facts: Jovito Salonga) – Glenda Marie Castro/Rappler.com