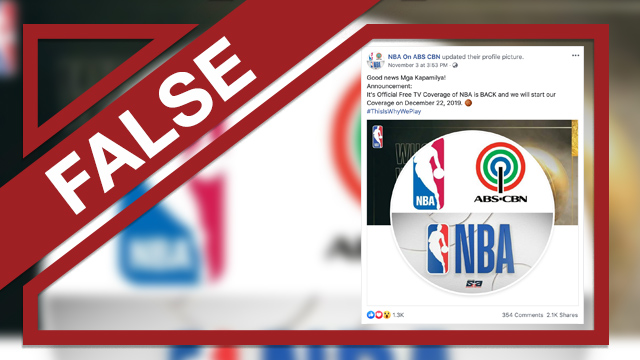 Claim: National Basketball Association (NBA) games will be available on free-to-air television on ABS-CBN, as announced by Facebook page NBA On ABS CBN.

“Good news Mga Kapamilya! Announcement: It’s Official Free TV Coverage of NBA is BACK and we will start our Coverage on December 22, 2019. #ThisIsWhyWePlay,” the Facebook page posted on November 3.

A reader sent the link to the post to Rappler for verification. As of writing, the post got over 2,100 shares, 1,300 reactions, and 354 comments.

The same reader also emailed another link from the same page, which read: “From a reliable source: Under the terms of the joint bid, Cignal TV and ABS-CBN agreed to show the NBA games both on free television (TV5 and ABS-CBN S+A) and cable (Cignal TV and Sky). Cignal also plans to launch a channel similar to NBA Premium, which is owned by Solar, and convert ONE Sports into its own version of BTV.” It was also posted on November 3.

The page regularly posts team standings and other advisories. It had over 6,100 followers as of November 19.

The facts: NBA Philippines told Rappler via email that the Facebook page NBA On ABS CBN “is fraud.” The local unit of the global professional sports league media business officially struck a deal with CNN Philippines, not ABS-CBN, to air select games on free-to-air television until the end of the year.

“We can confirm that select NBA regular-season games are currently available on free-to-air broadcaster CNN Philippines and social media across the league’s accounts on Facebook (NBA Philippines) and Twitter (@NBA_Philippines),” said NBA Philippines.

As for future plans, NBA Philippines declined to comment as negotiations are still ongoing. “As mentioned previously, we are not in a position to talk about active discussions but continue to assess opportunities to optimize the distribution of our programming,” they said.

NBA Philippines announced the partnership with CNN Philippines on November 13 and released a broadcast schedule of games from November 16 to November 30. (READ: NBA games back on free TV in PH)

In an earlier press release, NBA Philippines also announced that select games will also be available for free on Facebook Watch and Twitter. – Pauline Macaraeg/Rappler.com