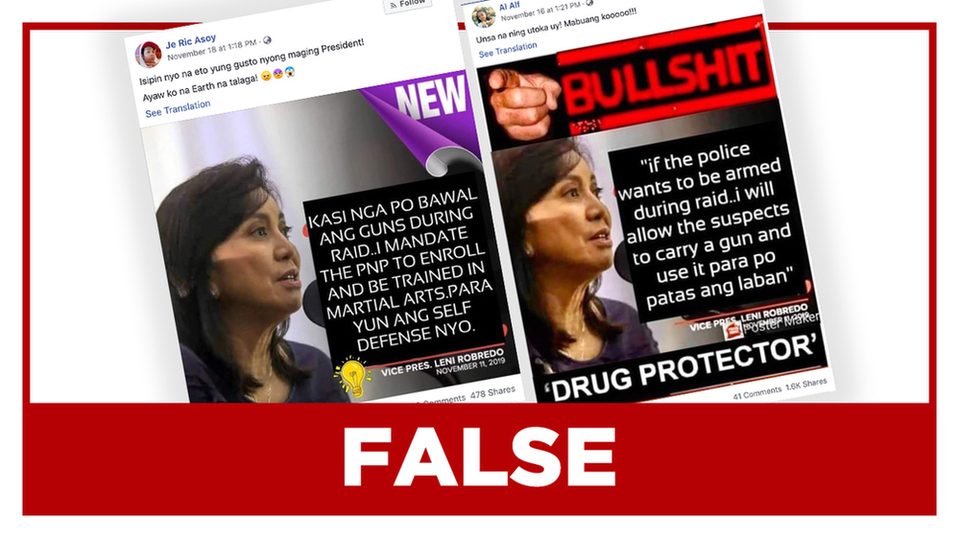 Facebook Twitter Copy URL
Copied
Like the earlier false claim that said she banned police from carrying firearms during drug ops, the Vice President also did not say these statements

Claim: Vice President Leni Robredo was quoted as saying she wants to allow suspects to carry guns to give them a “fair chance” against the police during drug-related operations.

A photo of the Vice President and a quote attributed to her went viral on Facebook a week after she accepted the role of drug czar on November 6. “If the police wants to be armed during raid… I will allow the suspects to carry a gun and use it para po patas ang laban (to give them a fighting chance),” the quote read. Under it was the Vice President’s name and the date November 11, 2019.

Another version of the photo circulated on social media, where the Vice President allegedly recommended martial arts training to police officials to learn “self-defense” and protect themselves against the suspects. The same photo was used in this version and was also dated November 11, 2019.

Several readers sent links to these posts to Rappler via email. Facebook Claim Check, the social media network’s tool that identifies potentially dubious posts spread across the platform, also flagged several posts with these quotes for fact checking. As of writing, at least 9 posts were still up on Facebook, with over 5,200 shares, 1,100 comments, and 1,800 reactions combined.

The facts: The quotes attributed to Robredo are fake. No legitimate news outlet reported the Vice President saying the statements in the viral photos.

Rappler also reached out to the 3 accounts that posted the earliest available photos on Facebook to ask for their sources. Two replied but failed to give sources – one of them took down their post shortly after responding. The 3rd one also replied and said that he knew the post was false but shared it anyway because “it was funny.” All 3 of them posted the photo on November 15.

On November 11, the date indicated in the photos, Robredo went to two meetings as the new Inter-agency Committee on Anti-illegal Drugs (ICAD) chair. However, neither allowing suspects to carry firearms nor making the police train for martial arts were part of the agenda of both meetings.

Instead, Robredo met with representatives from the United Nations Office on Drugs and Crime (UNODC) on November 11 to talk about the “best practices” in public health-based approach against drugs that the Philippines can adopt from other Southeast Asian countries.

The Vice President also met with the core members of the Community-Based Drug Rehab Alliance that same day to work towards “people-centered, humane, and evidence-based” solutions to the country’s drug problem. (READ: Robredo, U.N. office tackle ‘best practices’ on health-based approach vs drugs)

This is the 3rd set of fake quotes spotted by Rappler attributed to the Vice President after she accepted the drug czar role. An earlier false claim said that Robredo banned police from carrying firearms during drug operations to make sure no suspect dies. Another claim said that she “crafted” her own survey of drug users by asking them one by one, which was also false. – Pauline Macaraeg/Rappler.com