FALSE: ‘Photo’ of ‘second fall in a month’ by Pope Francis Facebook Twitter Copy URL
Copied
The images used in the post are old photos taken on July 28, 2016, when Pope Francis fell during the Holy Mass at the Jasna Gora Monastery, a pilgrimage site in Czestochowa, Poland

The image included a text that claims, “Pope Francis has suffered from illness and this is the second time he has fallen in a month.”

The page captioned the post, “Pls.. pray for Pope Francis.” 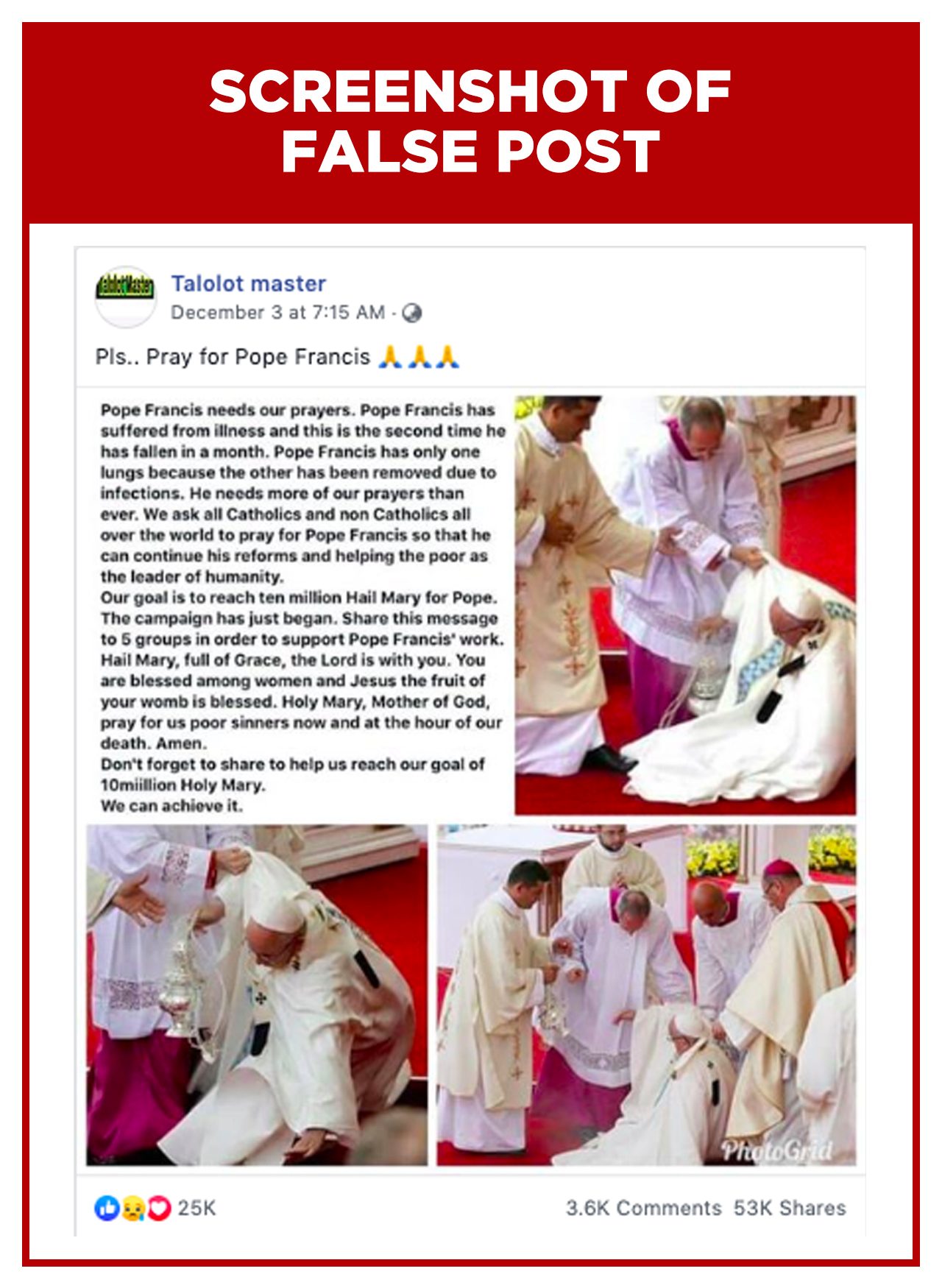 The post reached an engagement of 53,782 shares, 25,620 reactions, and 3,611 comments, as of writing. The claim was spotted via Facebook Claim Check, a tool to detects potential false posts spreading across social media.

The facts: The images used in the post were old photos taken on July 28, 2016 when Pope Francis fell during an open-air mass at the Jasna Gora Monastery, a pilgrimage site in Czestochowa, Poland. It was falsely repurposed for this claim posted December 2019.

The Pope led the mass during the 1,050th anniversary of the baptism of Poland in 2016. The pontiff was in Poland at that time to also celebrate World Youth Day from July 27 to 31.

According to New York Post’s article dated August 1, 2016, the pontiff said he was looking at the image of the Black Madonna, a Virgin Mary icon, when he missed a step and stumbled to the floor. The priests rushed to help him stand after his fall.

The Associated Press (AP) reported on July 28, 2016, that Vatican spokesman Greg Burke said “the pope is fine” and is “in good condition” after the incident.

The edited photos used in the false claim came from different sources. The photo in the bottom left was taken from a tweet posted by @TheStarKenya, the Twitter account of Kenya-based daily newspaper The Star, Kenya while the photo in the bottom right was from AFP photojournalist Filippo Monteforte.

Rappler also searched for another event when the Pope fell in July 2016. Using Google search filters, there were no results shown except for the mass in Poland. We also searched if the same incident had happened anytime in 2019, but there were no official reports.

As for his health condition, Pope Francis indeed has only one lung after the other was removed due to an infection when he was a teenager.

Rappler asked the Facebook page for their source of the image they have posted. According to them, they got it from another page but could not remember what specific page it was. – Glenda Marie Castro/Rappler.com