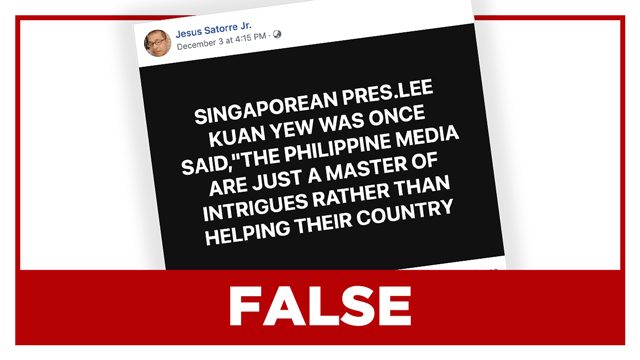 Claim: A Facebook post by user Jesus Satorre Jr quoted former Singapore prime minister Lee Kuan Yew as saying that the Philippine media are “just a master of intrigues” in a status posted on December 3.

Without citing sources, Satorre wrote: “SINGAPOREAN PRES. LEE KUAN YEW WAS ONCE SAID,’THE PHILIPPINE MEDIA ARE JUST A MASTER OF INTRIGUES RATHER THAN HELPING THEIR COUNTRY’.”

In the comments section one user asked for Satorre’s source, to which he answered “YouTube.”

Satorre’s post got over 33,000 shares, 2,200 reactions, and 12 comments as of writing. It was flagged by Facebook Claim Check, the social media network’s tool that identifies suspicious posts spread across the platform.

The facts: The former Singapore prime minister did say something about the Philippine media in an old speech, but he did not say the words posted by Satorre. Rappler also reached out to Satorre to ask for the source of his post, but received no response.

In 1988, Lee delivered a speech titled in Washington, USA titled “A Third World Perspective on the Press.” Lee explained there why the US model of the press has not been proven to be a universal standard.

The full and original video can be found here but here’s a clip of what he said about the Philippines:

“Before martial law, it was an Asian version of the United States system. The Philippines press enjoyed all the freedoms, but they failed the Filipino people. A widely-partisan press helped Filipino politicians to flood the marketplace of ideas of junk and confuse and befuddle the people so that they could not see what their vital interests were in a developing country.”

He continued: “And because basic issues like economic growth and equitable distribution was seldom discussed and never tackled, the democratic system malfunctioned and President Marcos was able to declare martial law. Fortunately, a miraculous demonstration of people’s power in February 1986 saved the country from impending disaster.”

Lee also explained in his speech that the members of the media play different roles in other countries, and these roles have “grown out of their different historical experiences, political systems, and their national temperaments.”

This is not the first time Lee has been misquoted. In October, there was also a quote attributed to him about democracy, which Rappler found to be false. – Pauline Macaraeg/Rappler.com