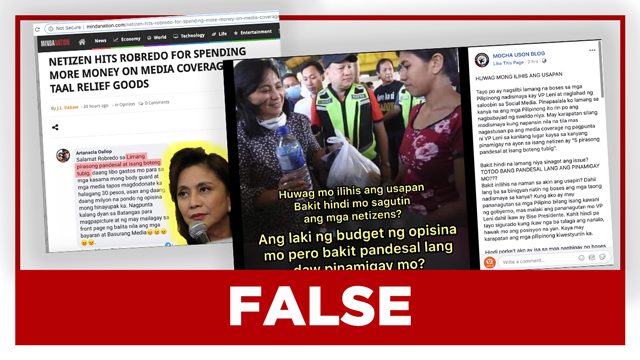 Claim: Vice President Leni Robredo gave “only 5 pieces of pandesal and bottled water” to the victims of Taal Volcano eruption, according to a Facebook comment by user Artanacla Oallop.

(Thank you, Robredo, for the 5 pieces of pandesal and one bottle of water. You spent hundreds of thousands for your bodyguards and the media that accompanied you, then you donate packs worth P30 each? Where are the millions of funds allocated to your office, you, ass…?)

Oallop’s comment was spread by Mindanation.com and Facebook page MOCHA USON BLOG. Mindanation turned Oallop’s comment into an article on their website and titled it “Netizen hits Robredo for spending more money on media coverage than Taal relief goods.”

(It’s not surprising that people are mad with this kind of rotten style. It is also not the first time Leni put photo ops first before giving actual help to the victims of the tragedy.)

A few hours later, Uson again posted a photo that said: “Ang laki ng budget ng opisina mo pero bakit pandesal lang daw pinamigay mo?” (Your office has a huge budget, but why did you only distribute pan de sal?) This post has had over 2,800 shares, 15,000 reactions, and 3,400 comments as of writing.

“I don’t know if there were pan de sal. But I am sure there were (goods with) hard case – could be canned goods or tetra packs, I’m not entirely sure.” Leviste told Rappler in a phone interview.

He added that each pack of goods contained groceries, rice, a large bottle of water, and an N95 face mask. “Ako ang katulong sa pag-abot eh (I was the one who helped her distribute),” he said.

Vince Liban, a volunteer who was at the relief operations, also contradicted Oallop and Uson’s claims. “This is infuriating. I was at the Relief Ops. We packed rice, assorted canned goods, and noodles in each food pack. Mocha Uson is not only spreading fake news. She is disrespecting the people who volunteered and is sowing discord in a tragic time like this,” he said.

(This is an insult to the many people who donated to my office. In fact, last Monday night, we called for volunteers. In less than an hour, a lot of volunteers arrived at our office, and they can say what’s really inside those relief packs.)

The Office of the Vice President said they were able to distribute 2,101 food packs and 1,000 face masks to the Taal victims through Angat Buhay and its partner organizations. Each food pack contained 1.5 kilos of rice, assorted canned goods, and two packs of noodles.