Claim: A United Nations (UN) human rights body has supposedly “dismissed claims” by the European Parliament over extrajudicial killings in the Philippines during the time of President Rodrigo Duterte.

The claim also said this was the “first time” that the UN is “defending” Duterte since Antonio Guterres assumed his post as UN Secretary General in January 2017.

The claim said the human rights body “has done an investigation on the extrajudicial killings in the Philippines.”

“I want to announce it here that the war against drugs in the Philippines under President Rodrigo Duterte is for the good of the people, of the Philippines and it is indeed promoting patriotism and good governance. Let Duterte do his work peacefully,” said the claim that supposedly quotes Guterres.

This was recently shared word-for-word by some Facebook users and pages around January 30 or 31. 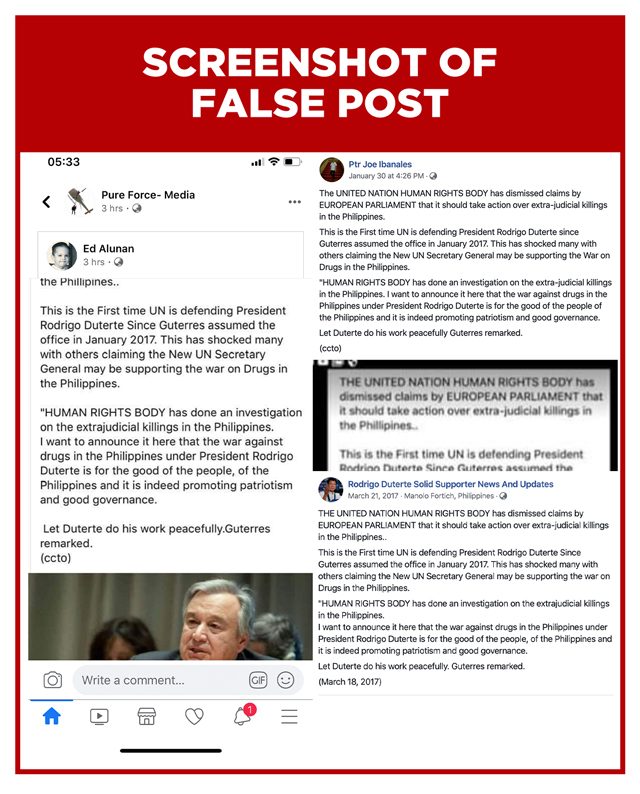 A screenshot of the claim was also emailed to Rappler for verification.

The facts: There is no such quote from UN chief Guterres. The claim was also rehashed, first surfacing at least as early as 2017.

Google searches using the text in the claim do not point to official statements or news stories that contain this supposed response of the United Nations or Guterres on investigations into the country’s war on drugs.

In fact, in July 2019, at least two years after the claim surfaced, the United Nations Human Rights Council adopted a resolution – drafted by Iceland – that lays out a set of actions against the killings in the Philippines, including those in Duterte’s war on drugs.

One of the actions in the resolution requested UN High Commissioner for Human Rights Michele Bachelet to “prepare a comprehensive written report on the situation of human rights in the Philippines.”

Bachelet is expected to present her report at the UNHRC’s 44th regular session to be held from June to July 2020.

Local site memebusters.net also debunked this claim in March 2017, pointing to a website that first spread the claim. That website, thet1mes.com, is now inaccessible.

Around the time this claim originally surfaced, the European Parliament had adopted a resolution calling for the release of detained opposition Senator Leila de Lima and for a stop into “proceedings to reinstate the death penalty.”

A year later, in April 2018, the European Parliament in another resolution called for the end of extrajudicial killings in Duterte’s anti-illegal drug campaign. – Michael Bueza/Rappler.com