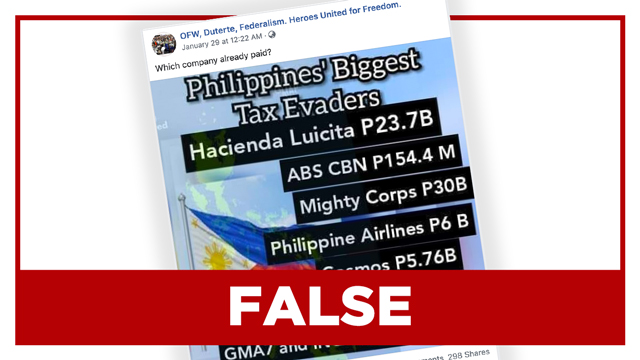 Claim: A graphic listing down the country’s “biggest tax evaders” circulated on Facebook. Media organizations are part of the list, such as ABS-CBN Corporation, Rappler, GMA Network Inc, and the Inquirer Group of Companies’ Inquirer.net.

Other organizations on the list are Hacienda Luisita, Mighty Corporation, Philippine Airlines, and Cosmos Bottling Corporation. 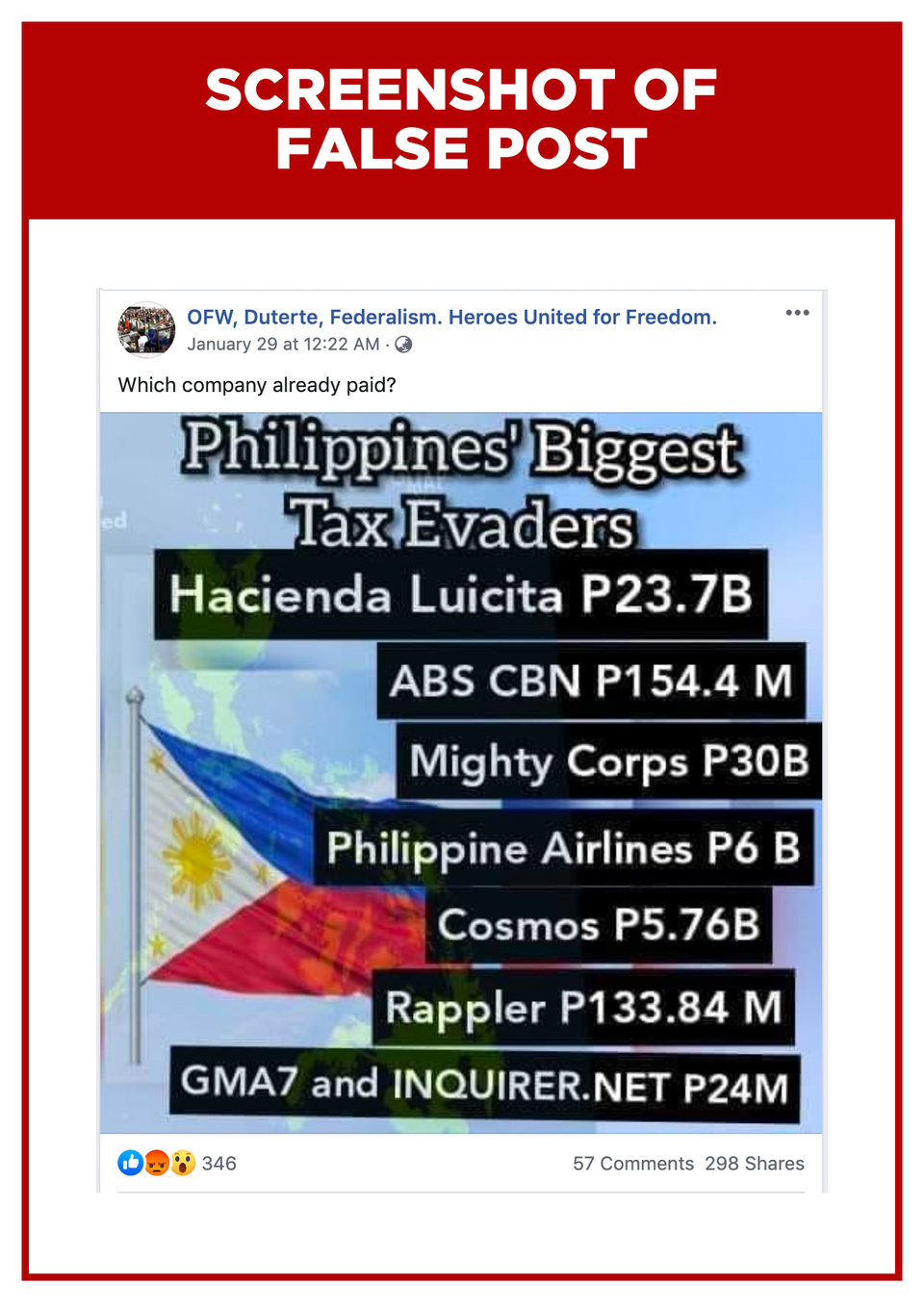 As of writing, the two pages’ posts had been shared 307 times, and had 355 reactions and 58 comments combined.

The facts: There is no basis nor proof for saying the 8 entities on the list are the “biggest tax evaders” in the country. The graphic also misleads by mixing entities whose supposed tax arrears are in the millions with those who have significantly bigger (billions of pesos) in tax deficiencies.

The Bureau of Internal Revenue (BIR) released a list of the cases under its Run After Tax Evaders (RATE) program filed with the Department of Justice (DOJ), but this list includes a total of 503 RATE cases filed in court between July 2016 to September 2019, the latest available. It does not indicate whether the alleged tax evaders have been convicted.

Among the 8 entities mentioned in the graphic, only Rappler and Mighty Corporation were included in the RATE list. Claiming these are harassment suits, Rappler has sought the outright dismissal of the 4 tax cases filed against it. In 2018, in fact, the BIR itself named Rappler one of the country’s top withholding agents.

Mighty Corporation, on the other hand, paid for settlement.

The cases against Rappler stem from its issuance of the Philippine Depositary Receipts (PDRs) to foreign investors Omidyar Network and North Base Media. In November 2019, Rappler and its CEO Maria Ressa sought the dismissal of these cases after BIR’s own witnesses admitted that it was the first time that a holding company that issued PDRs was being categorized as a “securities dealer.” Citing jurisprudence, Rappler also argued that PDRs are legitimate financial mechanisms that do not generate taxable income.

Moreover, the RATE list contains only the taxpayer’s name, violations, and date filed with the DOJ. It is arranged chronologically and not by amount as seen in the graphic.

“The other cases pre-2016 are still being validated, so it may not be shared to the public as yet,” BIR told Rappler in a letter dated February 18, 2020.

Unlike the other programs of the BIR that aim to generate revenues, RATE aims to investigate, prosecute, and convict tax evaders and violators – be it an individual, association, partnership, or company. (READ: #AskTheTaxWhiz: The BIR’s RATE for tax evaders) – Pauline Macaraeg/Rappler.com

Note: Due to conflict of interest, Rappler will not be rating the Facebook posts containing the graphic on Facebook’s fact-checking tool.