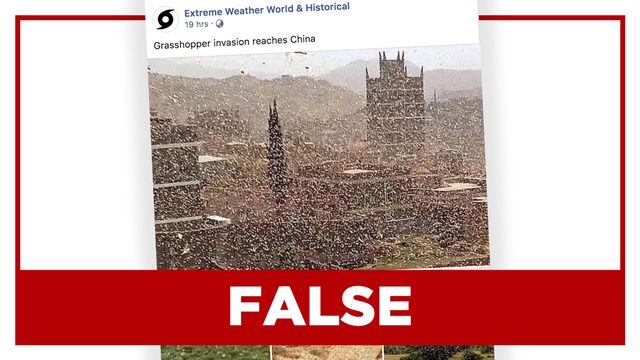 The claim was made by the Facebook page Extreme Weather World & Historical on Wednesday, February 26, using 4 photos showing insect swarms over different landscapes. The facts: The post used photos from locust outbreaks that occurred in the past, and none of them were taken in China.

The Extreme Weather World & Historical page primarily posts photos and videos of natural phenomena, most of which do not provide the context of time.

Four photos of insect swarms were used in the post claiming the “grasshopper invasion” in China. A reverse image search, however, showed that the original photos depicted different locust outbreaks in past years.

The first photo was originally posted on July 25, 2019 by the Food and Agriculture Organization of the United Nations in an article about desert locust outbreaks in Yemen and the Horn of Africa.

The caption of the photo said the locust swarm flew over a village near Abyan, Yemen, in search of suitable areas for laying eggs.

Meanwhile, the second photo was originally taken by photographer Ben Curtis for the Associated Press, showing the locust outbreak in East Africa that occurred in January 2020.

The original caption read: “Swarms of desert locusts fly up into the air from crops in Katitika village, Kitui county, Kenya Friday, Jan. 24, 2020. Desert locusts have swarmed into Kenya by the hundreds of millions from Somalia and Ethiopia, countries that haven’t seen such numbers in a quarter-century, destroying farmland and threatening an already vulnerable region.”

The third photo was posted as far back as November 29, 2004 by photographer Juan Medina for Reuters, depicting a locust swarm in Spain’s Canary Islands.

The caption for the original photo said that the swarm of pink locusts flew on a beach near Corralejo, on the Spanish Canary Island of Fuerteventura. According to the caption, around 100 million of the insects reached the Canaries from Western Africa.

Lastly, the fourth photo was posted on January 24, 2020 by photographer Njeri Mwangi for Reuters. The caption said the subject of the photo was a swarm of desert locusts in Nakwamuru Village, Samburu County, Kenya.