FALSE HEADLINE: ‘No classes’ on 3 dates in March 2020 due to special holidays 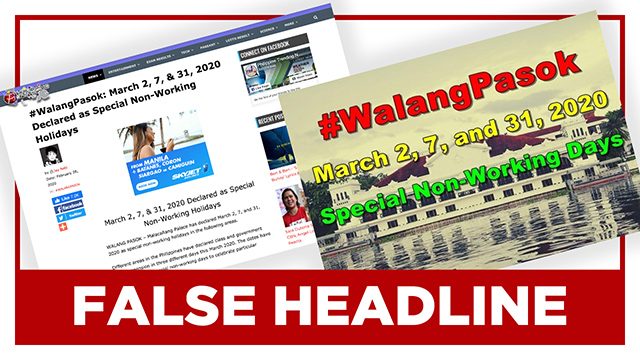 Facebook Twitter Copy URL
Copied
The special non-working holidays on March 2, 7, and 31 cover only certain areas and are not nationwide holidays

Claim: There are no classes on March 2, 7, and 31, 2020, because the government declared these as special non-working holidays.

The website philnews.ph published a story on Friday, February 28, with the headline, “#WalangPasok: March 2, 7, & 31, 2020 Declared as Special Non-Working Holidays.”

The facts: It is unclear in the headline and in the carousel graphic of the article that the holidays cover only certain areas in the Philippines.

However, readers might read only the headline or see the carousel graphic on social media, and interpret the dates as nationwide holidays.

March 2 is a special non-working day only in La Union, declared through Proclamation Number 911, to mark the province’s 170th founding anniversary.

March 7 is a special non-working day in Basilan only, declared via Proclamation Number 912, to mark the 46th founding anniversary of the province.

March 31 is a special non-working day only in Panabo City, Davao del Norte, after the signing of Proclamation Number 913 to celebrate the 19th year of the city’s founding.

Philnews.ph had used a similar unclear headline before. In June 2018, Rappler pointed out that among the 8 dates it listed in an article headline as having #WalangPasok or “no classes” that month, only June 12 was a national non-working holiday. The rest were special non-working holidays in specific municipalities, cities, or provinces only. – Michael Bueza/Rappler.com