FALSE: Noynoy Aquino to ‘finally be arraigned’ for Mamasapano 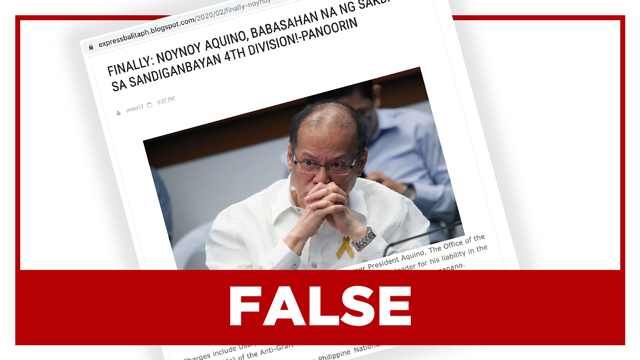 Claim: Former president Benigno “Noynoy” Aquino III will “finally be arraigned” by the 4th division of the Sandiganbayan for his involvement in the deadly Mamasapano clash in 2015.

The webpage did not show the date when it was published, but its url indicated that it was published in February 2020. Data from social media monitoring tool CrowdTangle also showed that the link was shared on Facebook from February 28 to March 2, 2020. 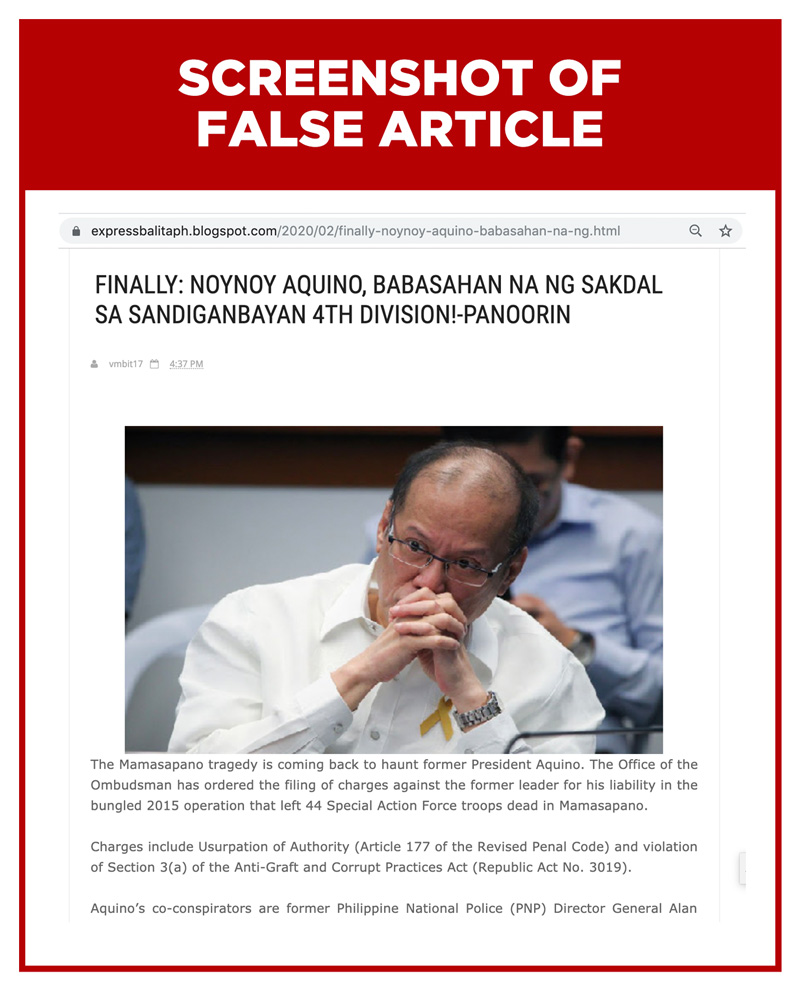 The link was shared 64 times in 40 different Facebook groups and pages. As of writing, these Facebook posts had 3,245 total interactions combined. Facebook’s monitoring tool called Claim Check flagged the link for fact checkers to verify, and was reported by two users as false on the platform.

The facts: As of March 2020, when the article circulated on Facebook, Aquino had already been cleared of all Mamasapano charges. The information provided in the article is outdated and no longer accurate. (READ: TIMELINE: Mamasapano clash)

In August 2019, the Sandiganbayan 4th Division formally dropped graft and usurpation charges against Aquino. It acted upon the request of Ombudsman Samuel Martires, who defended this by saying that “no president of the Philippines can be accused of usurpation.” He also said that he would “entertain” a new complaint for charges of reckless imprudence resulting in homicide, if filed.

A month after, the Supreme Court (SC) denied a petition backed by Solicitor General Jose Calida that sought to charge Aquino with 44 counts of reckless imprudence resulting in homicide. This SC ruling in September 2019 essentially cleared Aquino of all Mamasapano-related charges.

In January 2020, the Sandiganbayan also cleared Purisima and Napeñas of usurpation and graft charges related to the Mamasapano clash. The anti-graft court said that there can be no case of graft because the generals did not receive anything in return. (READ: Mamasapano clash: What did Aquino know?)

Lastly, the video embedded in the article was from News5’s official Facebook page, and was posted in January 2018 – before both the Sandiganbayan and the Supreme Court decided on Aquino’s cases. – Pauline Macaraeg/Rappler.com